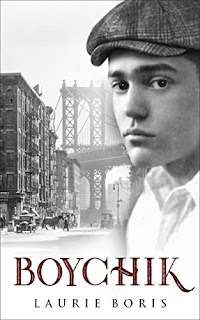 “He's a deli-man's son. She's a mobster's daughter. One chance encounter changes both their lives.

Eli Abramowitz works in his parents’ deli in Williamsburg. Not a bad job during the Depression. His family is his whole world—almost. He spends every Sunday at the movies and hopes to hit it big as a Hollywood screenwriter. But how can he tell his parents that one day he’ll be leaving?

Across town, Evelyn Rosenstein’s father works for the mob—undoubtedly the reason they’re doing so well. Definitely the reason she’s not allowed any farther than their mailbox unescorted. Even though her parents have chosen a husband for her, a family tradition, she fantasizes about a life in service to the unfortunate. But for the moment, she dreams of escape, if only for a few hours.

Opportunity strikes, and she ends up at the deli. Evelyn and Eli meet only briefly, but their instant connection tempts an unlikely, forbidden romance. When a charity dinner has them again crossing paths, danger follows. But will it shadow them into their futures?”

“Laurie Boris has been writing fiction for thirty years and is the award-winning author of nine novels. When not playing with the universe of imaginary people in her head, she enjoys baseball, reading, and avoiding housework. She lives in New York's lovely Hudson Valley.”

I loved this book. Although I don’t read historical fiction very often, I found the time this story took place, in the middle of The Great Depression, made the story more intense because of the difficulties that came at that point in history. Imagining what it was like to grow up in Brooklyn at this time was interesting and added a lot to the story, but we’ve also got some romance, a bit of a thriller plot, and an excellent coming-of-age storyline all in one compelling story. The last few books I’ve read didn’t grab me. I was ready for a change and Boychik filled the bill, with a story that kept pulling me back, wondering what was going to happen next and how the various conflicts would resolve in the end.

Although the preliminary edition of the book I received for review didn’t have it, my understanding is that a glossary of Yiddish words has been added to the book. The characters slip a lot of Yiddish words into their dialogue. I found that most of the time I had either picked up the meaning of the word (or thought I had) over the years or, since I was reading on my Kindle, was able to find any word I wasn’t sure of in the built-in dictionary or Wikipedia, which Kindle searches if it can’t find the word in the dictionary. But I can see how a glossary could be useful to many.

My goodness. I am verklempt! Thank you so much, Big Al and Pals!

I loved it, Laurie.