Review: My Obit: Daddy Holding Me by Kenneth Atchity 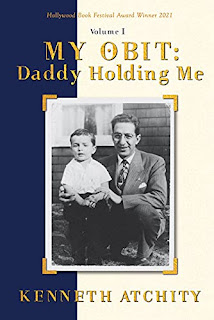 The author describes his book this way.

“At the prompting of a marketing friend, I was advised to title this book, My Intensely Madcap, Lebanese/Cajun, Jesuit-Schizoid, Terminally Narcissistic, Food-Focused, East Coast/West Coast, Georgetown/Yale, Career-Changing, Cross-Dressing, Runaway Catholic Italophile, Paradoxically Dramatic, Linguistically Neurotic, Hollywood Academic, ADD-Overcompensating, Niche-Abhorring, Jocoserious Obit. But when my designer pointed out that title wouldn’t fit on the spine, much less on any public display list, I changed my mind. Again! The story of my life.

Which this is at least the first volume of. I hope it makes you laugh, spares you some of my grief, and leads you to insist on telling your story to anyone who will listen.”

“Dr. Ken Atchity loves being a writer, producer, teacher, career coach, and literary manager, responsible for launching hundreds of books and films. His life's passion is finding great stories and storytellers and turning them into bestselling authors and screenwriters--and making films which send their stories around the world.

His books include, most recently, novels The Messiah Matrix and Seven Ways to Die (with William Diehl) and nonfiction books for writers at every stage of their career. Based on his teaching, managing, and writing experience, he's successfully built bestselling careers for novelists, nonfiction writers, and screenwriters from the ground up.

Memoirs are an interesting beast. Some I’ve read have been people who I have a lot in common with, growing up in the same environment geographically and culturally, where I find myself comparing our respective life experiences and how we viewed them, sometimes adjusting how I view some things in subtle ways or feeling validated that the author and I are in agreement. Other times the memoirist and I have nothing obvious in common, yet I realize in contrasting our different lives that there are still commonalities with everyone that are part of the generic human experience. These can also help me understand people not like me, which has obvious benefits.

This memoir, billed as volume 1 of Kenneth Atchity’s autobiography, fell somewhere in the middle. I’ve written more than a few book reviews in my time, but never for the big publications that Atchity has. I’ve made a few career or life decisions that were outside the norm, shaking things up with a purpose, which Atchity does. But mostly his experiences were much different from mine, growing up in a much different environment, in a different time, with a much different relationship with his family from what I’ve experienced. He’s also risen to the top of multiple fields, overcoming lots of challenges on the way, learning as he goes, making mistakes, and learning still more from them. In the process of learning about his life, I think I learned a bit more about myself, and maybe picked up a few ideas to help guide me in the future based on the lessons he’s learned from life thus far.