Review: The Broken Heart of Arelium by Alex Robins 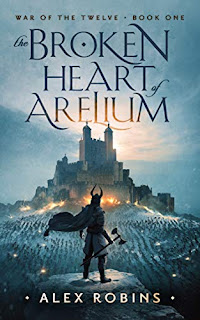 This is Alex Robins first novel, and the first in a series of four (over-arching title ‘War of the Twelve’). This one was published in March 2021, the fourth in June 2022. All have been brought out by Bradypus Publishing.

It is not giving away anything you won’t discover early on to add that the McGuffin is several vast, mysterious Pits, which are rigorously guarded for reasons long forgotten. As you might expect, it becomes all too apparent early on that the Pits have been guarded for centuries, and the action kicks off from there.

This has the sort of pace and structure that make me think the author is a keen video-gamer. Such gamers are its target readership.

Alex Robins was born in Norwich, England. His family moved to France when he was 12. He was by then already into The Dragonlance Chronicles by Margaret Weis & Tracey Hickman, The Hobbit and The Lord of the Rings by JRR Tolkien, and David Eddings' The Belgariad, and epic fantasy continued to be his go-to genre as he made a place for himself in a strange land. He now lives in the sunny Loire Valley in western France, surrounded by imposing castles, sprawling vineyards, and two children. He has degrees in agronomy, project management, and computer sciences.

Once I realised the video-gaming ancestry of this novel it quickly grew on me. Battle after battle is fought against overwhelming forces; the piles of the slain grow; new combatants are added on both sides; serious wounds are overcome with a mug of ale and a bowl of stew; mortal wounds do not prove fatal. The various battles, meetings and dialogues are ably described so that it is clear what is going on with the substantial cast of characters of more and less importance. We are given a full description of every location and of everybody’s clothing. (People make time to change at peculiar moments sometimes.) There is chivalry. There are monsters. There are rites of passage. There is a subtle hint of romance and a substantial whiff of treachery. Towards the end, meaty plot additions are left temptingly on the table to carry the book on into the second in the series (The Ashen Hand of Kessrin).

The author obviously knows his mediaeval battle armour (in our own world) and it gets a fair amount of space. If you don’t know your greaves from your gambesons you soon will. My dictionary admitted defeat pretty quickly. Just go with the flow.