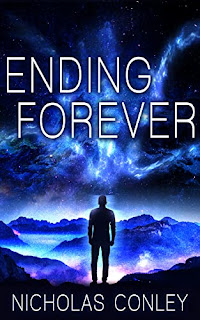 “Axel Rivers can’t get his head above water. Throughout his life, he’s worn many hats — orphan, musician, veteran, husband, father—but a year ago, a horrific event he now calls The Bad Day tore down everything he’d built. Grief-stricken, unemployed, and drowning in debt, Axel needs cash, however he can find it.

Enter Kindred Eternal Solutions. Founded by the world’s six wealthiest trillionaires and billionaires, Kindred promises to create eternal life through mastering the science of human resurrection. With the technology still being developed, Kindred seeks paid volunteers to undergo tests that will kill and resurrect their body—again and again—in exchange for a check.

Axel signs up willingly, but when he undergoes the procedure—and comes back, over and over—what will he find on the other side of death?”

A native of California who now lives in New Hampshire, Nicholas Conley describes himself as “an award-winning Jewish American author, journalist, playwright, and coffee vigilante.”

If there was an indication as to when this story takes places, I missed it, but it feels like it is in the not-too-distant future. The only indications I spotted to think it was in the future are that the richest people in the world are a bit richer than today and medical science has advanced a touch beyond where we are now. While some of the things that happen stretch the imagination a bit, I was to suspend disbelief fairly easily. Specifically, I’m talking about the ability for someone to die and be resurrected, not through the actions of some deity, but through the use of technology.

Of course the story gets you thinking, which I see as the point of this kind of tale. One rabbit hole my brain went down was pondering the repercussions of this technology being bankrolled by the world’s most atrociously rich people and whether they were going to use what they found to help mankind in a generic sense, or to make their lives longer and their bankrolls larger with no changes for the average person. The protagonist, Axel Rivers, and his life also sent my thoughts off on a tangent or two. Have you got someone who has passed away that you’d do almost anything to see again? Or have you got anyone still in this world who you’d be willing to do almost anything for? Do you have regrets in life that you wish you could somehow makeup for in some way? All of these questions are the kind of issues Axel struggles with in this book. If you’re like me you’ll wonder if you’d react the same as he did when addressing these questions. It all made for an entertaining and (hopefully obvious by this point) thought-provoking read.