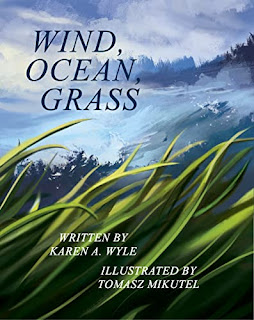 “This unique picture book has neither human nor animal characters, but instead features the wind speaking to the grass, explaining how long grasses are both like and unlike the waves of the ocean. Through lyrical prose and breathtaking impressionist-style paintings, the reader follows the wind’s journey over sea and land: the many moods of the ocean, the different seasons of the grassy field. We see glimpses of the birds that live off the bounty of the ocean, and the birds and flowers that live among the grasses.

Through this nature metaphor, the story, without becoming didactic, teaches children about seeing commonality and celebrating differences.”

My nine-year-old granddaughter who I call LBG read this book out loud for me. She did pretty good. While I think it stretched her reading vocabulary once or twice, she did a pretty good job. I was wondering how well she would relate to a book with no characters, at least not characters in the way we typically think of them. Instead the characters are parts of nature. I’m not sure how much she picked up the underlying message of celebrating differences (she’s pretty good about that kind of thing anyway). However, when she finished reading the book to me and I asked if she liked it I got a big smile and two thumbs up. Then she was off to play in nature, riding her bike outside with the birds, next to the grass, with the wind blowing in her hair. Almost like she was inspired by the book. I took that as an additional thumbs up. Three thumbs up from LBG doesn’t happen very often.

How does this work on a Kindle, Al? Presumably it is one of those books that will definitely repay enjoying in a paper format?