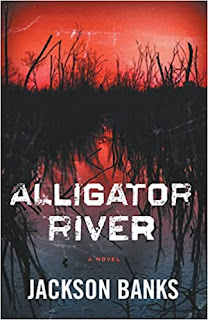 “Public defender Chase Blanchard has been assigned the biggest case of his career. Jeremy Martin, his new client, is a local fisherman with a troubled past accused of murdering a young tourist in the Alligator River National Wildlife Refuge on North Carolina's Outer Banks.

As Chase begins to think his client couldn't possibly be innocent and pushes him to take a plea, Chief Ranger Brandon Maddox begins digging into the murder on his own and finds evidence that could exonerate Martin. Maddox's trust in the system is betrayed, however, when the lead detective on the case and prosecuting attorney try to bury the exculpatory evidence.

Chase and Maddox begin to suspect a serial killer is at large in the community as more people turn up missing or dead. Unable to trust local authorities, the two form an unlikely alliance to find the real killer before time runs out for the next victim.”

“Jackson Banks is the pen name for a writer and trial lawyer who lives in Raleigh, North Carolina with his family. He writes stories across multiple genres, including thrillers, humor, and romance.”

While a thriller, in the beginning this feels like a mystery as public defender Chase Blanchard is assigned a client for a murder that the client insists he didn’t commit. The evidence available to Chase doesn’t appear very good for his client, but the reader fairly quickly becomes aware of things that appears to indicate the client really wasn’t involved. As the reader we’ll stay ahead of Chase the entire way, constantly hoping he and those who become involved assisting him will figure things out and minimize the suffering caused to others by the actual guilty party. In spite of suspecting and then knowing who the guilty party is for much of the book, not an uncommon situation in a thriller, this knowledge only increases the intensity. If you’re into thrillers, definitely worth your time to give this one a try.

Review is based on an ARC (advanced reader copy) and thus I can’t gauge the final product in this area.