Review: The Fable Ferrets: The birth of magic by Eric Wolf and Noah Wolf 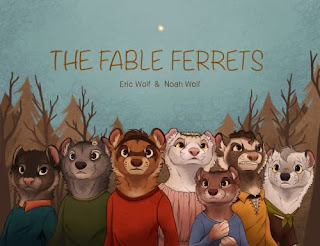 The first of a planned series of children’s pictures books featuring a group of seven ferrets, each with their own unique personalities and quirks.

Eric and Noah Wolf are in their twenties. Noah is the artist of the two, doing the drawings for this story with the words appearing to be a group effort since both are listed as authors.

I read this book with my 9 year-old granddaughter who I typically refer to as LBG in my reviews. LBG enjoyed the story, getting to know each of the ferrets and their unique personality as well as vicariously experiencing their little adventure in this story. We both thought the pictures fit the story well. However, I had a few concerns.

The first were a few grammar issues that snuck through the proofreading process. Not a lot, but with a book as short as the typical children’s picture book the errors stand out that much more. The book also uses a strange, at least to me, technique of using dashes rather the quotation marks to delineate the dialogue or words a character is saying from the other text. While different and not exactly standard, it works okay. Last is a bit too much of a propensity to replace the word “said” (as in she said or he said or Kenny said) with an alternative (“declared Kenny” is one example) or even more troublesome, trying to get too much information into a phrase like that, for example “said Teo confused” or even more extreme “declared Kenny, while analyzing what June said.”

Odds of a younger kid that this book would be aimed at taking issue with any of the concerns I have are slim, but the parents and grandparents who buy the books and sometimes read them to the kids might feel differently.

Some concerns in this area discussed in more detail in the appraisal section.