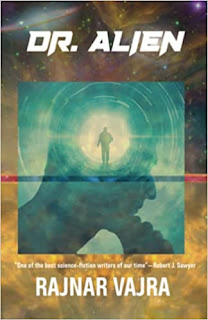 An alien species, the ‘Tsf’ has begun trading with Earth. They find single members of three other alien species adrift in space and bring them aboard their own space craft. The three appear to have no physical injuries, but perhaps some mental defect? The psychiatrist of the title is deputed to travel up to the Tsf ship and see what he can make of the aliens they have rescued. The three interlinked tales deal with what he finds when he gets there, how he helps the three aliens, and others. They also explore the problems that accrue when the Tsf reward him for his help.

Rajnar Vajra has been a regular and delightful voice in Analog magazine for many years. He also contributes to Tor.com (including their anthologies). One can only wonder why it has taken him so long to collect some of his stories together as he has done here.

I have been an Analog subscriber (and also Asimov’s), and always enjoyed the stories enormously. It contains hard SF of a most satisfying kind. The only thing you might say against it is that you can still see its origins in the Fifties: it isn’t particularly ‘slipstream-y’ or modern. Things (often space ships or medical equipment) get built, alien races are interacted with, the way our lives might be in the future is explored. There is very often a clever twist at the end which makes the reader ask ‘why didn’t I think of that?’, or preen quietly if s/he did.

These three stories were originally published as long stories (possibly serialised) in Analog. They build up one upon another and have an internal chronology. If you enjoy hard SF you will enjoy these. There are intriguing puzzles to solve before the clever twists I refer to above (what is wrong with the aliens? Why does the Doctor keep assembling and disassembling the same robot?); there is an interesting take on life in the future; there are well-imagined, seriously weird aliens; and the stories are funny. What more could one ask for?

Perhaps an interesting introduction to the three stories such as that provided by Stanley Schmidt (editor of Analog 1978-2012)? That latter date is perhaps a clue to one of the few problemettes with these three tales: they were all written between 2009 and 2012. They stand up pretty well, considering the youngest of them is 10 years old. One always fears – especially with near future stories such as Vajra claims these to be – that they may quickly become a mere historical curiosity because the real world has moved in a direction one’s authorial brain did not foresee.

Technology hasn’t overtaken these stories, human nature hasn’t changed, answers to the fundamental questions of the universe are still being sought. Which is presumably why these particular stories were chosen for this project. Nevertheless, I hope Vajra issues some more recent tales in this format soon.

I was working from an ARC, so cannot comment on the final accuracy of the book.