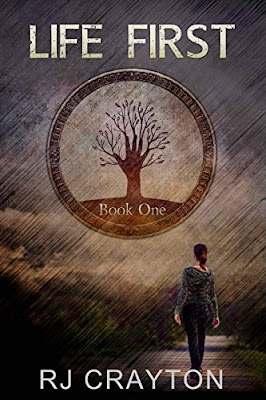 “Strong-willed Kelsey Reed must escape tonight or tomorrow her government will take her kidney and give it to someone else.

A native of the Midwest, RJ Crayton now lives in the suburbs of Washington, DC. Before starting her family Crayton worked as a journalist, but now spends her time writing fiction and as what she calls a “Ninja Mom.”

I’ve had a good run of dystopian novels lately. Life First continues that trend. A dystopia is the opposite of a utopia and typically a dystopian novel will extrapolate a current social or political movement taken to an extreme. Crayton’s extrapolated future struck me as different from most which, at the risk of getting too political, I’ll explain.