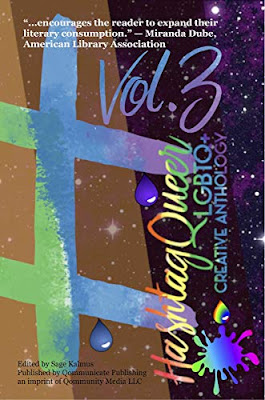 “Still all-queer all the time, Hashtag Queer, Volume 3 presents even more short fiction, nonfiction, poetry and scripts all written by &/or about LGBTQ+ people from around the world. Includes work by two writers from India, where being gay was only just legalized less than a year ago. Volume 3 features 30 pieces by writers from around the world and across the rainbow spectrum of sexuality and gender-identity. Topics and themes explored include social justice, personal empowerment, magical realism, asexuality, gender-transitioning, aging, religion, friendship, death, parenting, Houdini and Batman, as well as love (of course.)”

A variety of authors from the LGBTQ+ community, mostly from around the US, but including at least one from India.

My reasons for reading vary, but fall into a few categories. One of the big ones is the opportunity to put myself in the position of someone unlike me with the hope that by doing so I’ll understand them better. While members of the LGBT+ community would approach these stories from an entirely different angle, for me, it was this increased understanding that I hoped for when I decided to give this book a try. In many ways it delivered beyond expectations. I’m not much for poetry or reading scripts, but the short fiction and nonfiction in this collection definitely expanded my horizons, giving me some new perspectives on sexual and gender identity and what it is like for those who fall elsewhere on the spectrum than I do.