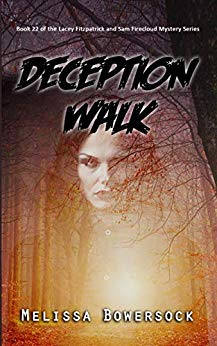 “The paranormal investigative duo of Lacey Fitzpatrick and Sam Firecloud are doing fine, but when an ex-girlfriend of Sam’s shows up, Lacey feels uneasy. Sam has never talked much about his past, so the sudden arrival of a beautiful blonde is disturbing. However, when that same blonde disappears without a trace, and Sam is the last person to see her, Lacey realizes her worries are just beginning. The LA County Sheriff’s office and the LAPD know more than they’re saying—and they both consider Sam a suspect.”

Sam Firecloud, Navajo medium, ends up in the hot seat after going out on an impromptu lunch with a former female friend he hadn’t seen or heard from in years. Sounds innocent enough, right? However, when this female friend goes missing and Sam is supposedly the last person to see her, things get complicated. Then the Sheriff’s Department finds her car abandoned in Angeles National Forest and Sam’s fingerprints are found in her Mercedes. The lead Sheriff Deputy Christianson does all he can to pin her disappearance and subsequent murder on Sam.

It’s not very often we see Lacey scared out of her wits. This story exposes her vulnerability when Sam is arrested for the woman’s murder. Of course he has no alibi, he works alone in his ceramic studio. Sam’s defense attorney, Rod Silversmith, keeps hitting road blocks from the court, which builds tension in the readers who are pulling for Sam. Lacey is conducting her own investigation and she has to be extremely careful not to be accused of witness tampering. She’s after the facts and has to do something to keep her mind occupied or it ventures to the worst case scenarios. The first twist in the plot is easily spotted. However, the rest of the story is an emotional rollercoaster all the way to the climax.

Deception Walk is book 22 in Ms. Bowersock’s, A LACEY FITZPATRICK and SAM FIRECLOUD MYSTERY SERIES. This series does not need to be read in order. However, you may miss some character development.