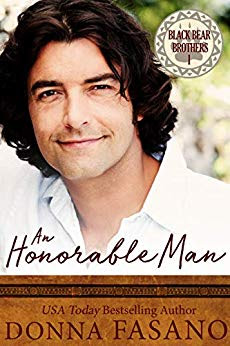 Author:
“Donna Fasano is a three-time winner of the HOLT Medallion, a CataRomance Reviewers Choice Award winner for Best Single Title, a Desert Rose Golden Quill Award finalist, a Golden Heart finalist, and a two-time winner of Best Romance of the Year given by BigAl's Books & Pals Review Blog. Her books have sold 4 million copies worldwide and have been published in two dozen languages. Her novels have made the Kindle Top 100 Paid List numerous times, climbing as high as #1.”

Thank you so much for featuring AN HONORABLE MAN on Books and Pals. I always feel so happy when my books are on your blog! :)

Thank you for stopping in and commenting, Ms. Fasano. I am fanning myself while reading "Woman of His Heart!" I am so glad you opened that bedroom door. Nice job! :D Oh, I shouldn't be talking about the next book yet...