Review: A Mountain of Untold Tales by Fleming J. Allen 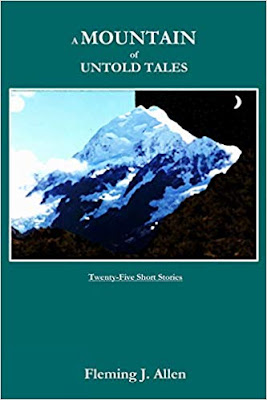 “… a book of twenty-five unique short stories. They are split into two categories. One group of narratives tend to illuminate the everyday experiences and issues of childhood, motherhood, family, marriage, adventure, and so forth. The other set of tales, however, accentuate the gloomier aspects of life which imagination dictates. They invoke fear, mystery, the supernatural, malice, despair, and more. Regardless of the variety of these fictional storylines, this collection aims to provide reflections and impressions that can be enjoyed and shared for years to come.”

In addition to this collection, author Fleming J. Allen has written a novel and a work of non-fiction.

The plot or underlying story in some of this collection was entertaining or interesting to a point, even if the presentation was often lacking. Other times I was left wondering what the point of the story was. While the stories in the first half were generally more upbeat and the second half tended toward darker subjects, I found my opinion was the same with both halves.

The issues I had with the presentation of the stories were numerous. I’ll hit on some of the high (or low) points in a quick list.

Proofreading was lacking. I found numerous sentences that were obviously lacking a word or had an extra word or in some other way didn’t make sense without reinterpretation. Homonym errors were also frequent.

It seemed like redundancy and long lists were the order of the day. While they increased the word count, they also slowed things down. An example of redundancy is the mention of a “snow blizzard” (snow is inherent in the definition of blizzard and specifying snow serves no purpose). Then there are sentences like this:

Again, this is way more specific detail than is important. “While in Washington he visited the typical DC monuments as well as several eating establishments he’d heard of” or words to that effect would do the trick. Sure, name one or two examples, but an exhaustive list is only going to put the reader to sleep. This issue wasn’t just a one-time problem, but a constant. Most stories had at least one example of this. I didn’t go back to check, but suspect some had multiple examples.

Another issue was throwing in lots of information about characters or places in the story that do nothing to contribute to the story, so just bog it down instead. For example, “They also jumped into the bath or shower to clean up and changed into their warm pajamas. They had the footed kind.” If having the “footed kind” of pajamas figured into the story in any way, knowing this could matter (although there is probably a better way to let us know about it). But if it doesn’t figure into the story or tell us something important about the character, it’s just a bunch of useless noise.

Ultimately it was a struggle to read this to the end. The stories need a lot more polish.

Numerous proofreading issues that ranged from extra or missing words to homonym errors and various other problems.