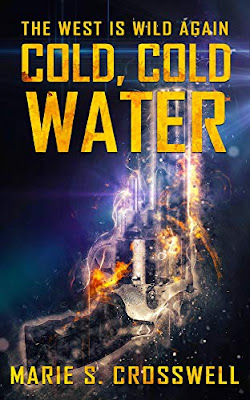 “In a lawless American West transformed by the Second Civil War, part-time bounty huntresses Ramona del Toro and Jo Lilly take a job: find and capture a mysterious woman named Cottonmouth, accused of murdering an innocent man. As they track her through northern Arizona, southern Utah, Colorado, and New Mexico, Ramona and Jo encounter colorful people who can only point them in Cottonmouth’s direction. When Jo and Ramona finally catch up to Cottonmouth, she reveals the truth. Will the bounty huntresses join their target or trade her for a bag of cash?”

A graduate of Sarah Lawrence College in upstate New York, Marie Crosswell now makes her home in the American West where she writes fiction of varying lengths and genres. She also writes poetry that, thus far, she’s been keeping mostly to herself.

This story takes place a few years from now, in 2043. But in those few short years things have happened that have changed the world in ways both obvious and subtle. The most obvious is that the Second Civil War in the US is now over. You didn’t even realize it was going to happen? Sorry for the spoiler. It’s now over and one of the results is that law enforcement is spotty, so people have had to take over enforcing social norms themselves. This has meant the rise of bounty hunters like Ramona and Jo, the main characters of our story, who for a price will track down wrongdoers, possibly bringing them back to the person who hired them so the client can exact whatever punishment they see fit.

I wasn’t sure what I’d think of this genre, described as “Western Dystopian,” which is just like what it sounds like. It’s dystopian, in that it happens in a future world that has changed in ways that aren’t so good. But it’s Western, in that in the largely rural area of the western US where this story takes place, things are lawless, with the fastest gun being the ultimate authority.

I not only enjoyed the basic story, but was drawn into it even more by the creative and different aspects to the characters and the story world. Not just the unique combination of dystopian and western genres, but also the non-traditional sexuality of the main characters. Overall this made for a quick, entertaining, and often thought-provoking read.