Review: The Winter of Our Distemper by Victor Catano 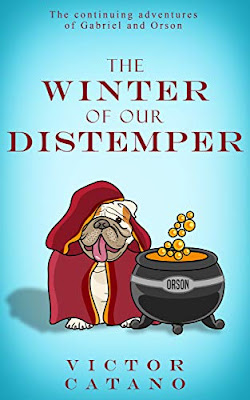 “After their recent adventures in Florida, Gabriel, Sheila, and Orson are due for a vacation. But their dreams of beaches are interrupted by an urgent cry for help.

Sheila's aunt, the witch who first taught her magic, has hidden herself away in snowy Maine. Now she's being targeted by a radical environmental group that's demanding her help... or else. They've mastered an ancient native magic and are going to use it to destroy anyone who gets in their way. And they have a nasty habit of controlling animals... including Orson.

It will take all of Sheila's magic and Gabriel's skills to stop them, and it just might tear them apart before they're through. But if they fail, it could be the darkest night of all.”

“Victor Catano lives in New York City with his wonderful wife, Kim. When not writing, he works in live theater as a stage manager, light designer, and technical director, working mainly with dance companies. His hobbies include coffee, Broadway musicals, and complaining about the NY Mets and Philadelphia Eagles.”

Sheila gets an urgent cognitive message for help from her Aunt Mona. So off Gabriel, Sheila and Orson go to snowy Maine in January. Sheila nor Orson are willing to say much about the relationship between Aunt Mona and her niece. Aunt Mona is eccentric and even though Mona taught Sheila how to use her magic, their relationship is a bit frosty. However, there is nothing Sheila wouldn’t do to help her aunt.

Mona was known quite well in the 60s and 70s on the protest circuit for her environmental position. Now in her own neck of the woods Caleb, an environmental zealot, wants Mona to join his group of protestors. And he’s not taking ‘no’ for an answer. Caleb is wielding a power that is not witchcraft. Mona thinks she may know who to ask to find the answers they need to confront Caleb. So off they all go to find the answers they need.

Their adventure takes some interesting turns, and an old friend of Mona’s joins their group. Oh the stories they tell! As they gather the information they need they learn some dark secrets about native magic, which Caleb is using, and he seems to be getting stronger. As our small team of heroes regroup to come up with a plan of attack, Sheila scolds Gabe for putting himself in danger and begs him to stay out of the coming battle. He promises he’ll try. Gabe is an awesome boyfriend for a witch to have, he’s loyal, supportive, and even being human he tries to do what he can to protect Sheila.

The climax is full of action and goliath battles. Gabe tries to stay on the sidelines until it starts looking bad for Sheila and he sees an opportunity to help. Even Orson gets in on the battle following Gabe’s example! It is a dangerous choice for Gabe to make, both by going against Sheila’s wishes and physically.

There is a wonderful surprise at the end, though. I am enjoying, A Gabriel & Orson Adventure series. Even though this is book 2 of the series it can be read as a standalone novel.

The Winter of Our Distemper is book 2 in Victor Catano’s, A Gabriel & Orson Adventure series. Following book 1, Tail and Trouble. However it can read as a standalone novel.