Review: Ghosters 3: Secrets of the Bloody Tower by Diana Corbitt 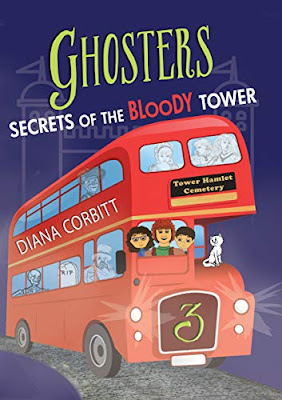 “When Theresa and her little brother Joey tour The Tower of London with their good friend Kerry, the kids expect to see a ghost or two, but they never imagined they’d find themselves involved in one of history’s most infamous missing person cases. They’ve got a pair of very impatient spirits on their hands and for good reason. The two 15th-century English princes have been forced to haunt The Tower for more than five-hundred years, all because someone else is buried in their Westminster Abbey tomb.”

Author:
“Diana Corbitt is a retired elementary school teacher living in northern California. Her work has appeared in Bewildering Stories and Encounters Magazine. She had a podcast on Manor House and one of her short stories was anthologized in Wax and Wane: A Gathering of Witch Tales.”

To learn more about Ms. Corbitt check out her website.

In this addition to the Ghosters series, Theresa, Kerry, and Joey get to take a hop across the pond. Theresa and Joey Martinez’s father is an author who is invited to do a two-week book tour in the United Kingdom. It would be an educational trip for the kids, and a shame for them to miss out on. It would also be a bummer if they had to traipse their father around to all the book tour stops. Luckily, their good friend and fellow ghost chaser, Kerry Addison, is from England and her grandmother lives in London. Grandma is more than willing to have the three kids stay with her while dad is gallivanting around the countryside on his book tour. It’s been a year since Gran has seen Kerry, so she’s overjoyed about the visit. Gran happens to be a retired history professor and an ex-tour guide at the Towers of London, so she knows the best attractions to get the kids tickets for. She is also ghost savvy.

Not two days into their visit Gran suffers an appendicitis attack and ends up in the hospital. Luckily Aunt Ginny lives right next door to Gran. The kids are allowed to tour London on their own during the day since Gran has it all planned out for them, then they’ll report back to Aunt Ginny’s every evening for dinner.

When a small boy appears to Joey in the Bloody Tower, he and the girls are curious. When they see the boy’s likeness in the portrait gallery, they are off and running to try to figure out why he and his brother are stuck in a small Bloody Tower room instead of properly buried in Westminster Abby, where their bones belong. They learn that there was scuttlebutt back in the day that the two young princes were murdered and their bodies hidden in an unmarked grave. No one knows whose bones are actually in the Abby in their place.

It’s a fun and educational adventure. As you can imagine there are lots of ghosts around London, some are new and some hundreds of years old, many of which are friendly and helpful or in need of help. Each encounter is different and engaging.

Poor Kerry has to lug around her electronic thingamajigs just to see and hear the blasted ghosts. And it’s always entertaining when Joey, who has Asperger syndrome, often takes words, rules, and common phrases quite literally. He also doesn’t like to be touched, so strangers aren’t allowed in his bubble. However, his sister, Theresa or Kerry, are always close by to protect, or explain situations and phrases for him. I especially enjoyed the times Theresa and Kerry tried to explain rule breaking to Joey, so he’d understand that sometimes rules have to be broken for the greater good.

Secrets of the Bloody Tower is a delightful romp through London with a big finale that makes this trip even more memorable. Don’t miss out on this story.

Secrets of the Bloody Tower is book 3 in Diana Corbitt’s, GHOSTERS Series.

A small number of proofing misses, such as missing, extra, or wrong words.