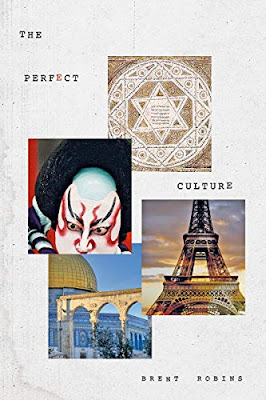 “Thomas Gephardt is a world traveler. Or at least he would like to be one. Determined to leave the confines of his sheltered upbringing in the United States, he voyages to France to expand his horizons. He spends three months with a French family in Bordeaux, working in a local hotel. Inspired by these experiences, Thomas has plans to continue traveling. However, a romantic interest in Paris—an Israeli woman named Sendi—complicates matters. He leaves, but remains in contact with Sendi while he lives abroad in Japan as an English teacher and then in Israel as a volunteer on a kibbutz.

Throughout his explorations, Thomas attempts to probe deeply into his experiences and to ponder big questions: What is the value of foreign travel? What is unique about each of these three cultures? How is each country shaped by its history? On the lighter side, Thomas has a variety of experiences—he is seen as a "quasi-alien" in a French restaurant, he wonders if he can meet expectations as a "talking monkey" in Japan, and he is informed that, unlike in The Big Lebowski, he definitely cannot roll on Shabbos in Israel.

Brent Robins lives in Cleveland, Ohio, where he participates in many interests including singing, exercise, reading, and watching movies. He’s also an avid traveler, having visited over forty countries.

Appraisal:
The problem with this book isn’t with the message it is attempting to impart on the reader. That message, which I’ll discuss shortly, is not only valid, but also something that could and should be of value to many potential readers. The problem is that the book tries to be something that it’s not (at least not in the form it’s taken) rather than what it wants and needs to be.

Anyone who has studied fiction writing has been exposed to the maxim that teaches a budding novelist to “show, don’t tell.” The idea behind this is that a character doesn’t tell the reader directly how they feel or what they’re thinking. Instead the character’s actions and his dialog (the words he speaks to other characters in the scene) communicate this to the reader in a more indirect, but also more entertaining way. An extremely large portion of The Perfect Culture is the protagonist, Thomas, outlining for the reader his reactions, his thoughts, often his entire thinking process to come to a conclusion about how he feels about something that just happened to him. By the end of the book I felt the same way about Thomas as his high school classmates, that he was very strange guy. But I wasn’t entertained in the same way I’d like a novel to do.

I started the book in agreement with the premise it is trying to illustrate, that travel is a positive for the traveler in exposing them to people, places, and cultures that are different from their home. However, the story did get me to recognize additional ways and reasons why this is true. But that was in spite of rather than because of the way the information was presented.

Possibly this same story, done much differently, could have worked as a novel. But I can also see the point being made better if it was done as a non-fiction book. That might be done by presenting vignettes of experiences different people had while traveling with the traveler’s explanation of what they’d learned from the experience. Or possibly, given the author’s extensive travel, this is a memoir in disguise. If so, maybe it should have been written as such. The one thing I’m sure of is, as a novel, this didn’t work for me.