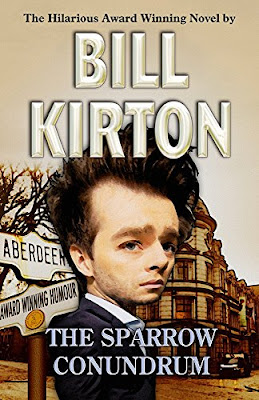 “Machin’s garden explodes, igniting a power struggle over lucrative North Sea oil and gas contracts. The Sparrow takes flight amidst chaos and violence that are the least of the strange goings-on.”

A former university lecturer, Bill Kirton was born in England and has lived most of his life in Scotland. He has written everything you could imagine, from academic essays and dissertations to songs and plays. He has several more short stories and novels available for your favorite eReader. You could find Kirton books on his Amazon author page.

I saw this described as a “crime spoof,” which is a perfect description. It is full of humor, often dry and subtle, as the stereotype of English humor would indicate. I learned the names of obscure (to me) birds and fish, which are used as codenames amongst the criminals; thankfully, my Kindle dictionary knew them all. Many of the criminals, especially the protagonist Chris Machin, are likeable and sympathetic (with the exception of those crimes they’re supposed to be committing). In contrast, the police are anything but, not to mention much better at crime than the criminals.

Beyond the story, I enjoyed the way Kirton strings words together. For example, I love this line, for how it twists the cliché into something clever, rather than overused:

“Hawk would undoubtedly have been more suspicious, but he was desperate for a gift horse and its mouth was invisible at the other end of a telephone line.”

Kirton won the 2011 Forward National Literature Award in the humor category for this book, and the reason is apparent.

Uses UK spelling conventions and slang (possibly Scottish too, but I’m no expert).

Some adult language. While there is very little that is explicit, sexual themes and innuendo are constant. If the thought of anything sexual makes you blush, especially if it involves obscure kinks and fetishes (anything beyond a man, a woman, and a bed), this isn’t the book for you.

Added for Reprise Review: The Sparrow Conundrum by Bill Kirton was the WINNER in the Humor and Satire category for B&P 2013 Readers' Choice Awards. Original review ran April 3, 2012.