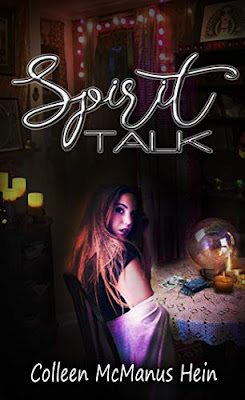 “In 1985, Fiona is a young woman from the suburbs of Chicago on the doorstep of the tidy life her parents planned for her: college, career, then hopefully marriage and children. Never mind the dead relatives who speak in Fiona’s ear. Never mind Fiona’s vivid dreams which then play out in real life. They are not part of the plan.

When a series of misfortunes interrupts Fiona’s fate, she finds herself living with her grandmother in a remote town in northern Minnesota. Grandma Mary has been shunned by Fiona’s parents due to her profession: fortune-teller and medium. As Fiona begins to learn her grandmother’s trade, she is finally allowed to embrace and explore the beautiful gift her parents tried to deny her.

And speaking of denial, Fiona falls for the one man in town who is off-limits. As her psychic abilities unfold, so does her heart. But is it safe for Fiona to open metaphysical and emotional doors? When dealing with the occult, probably not, but Fiona discovers she has more courage than she knew.”

“Colleen McManus Hein is a book-lover, avid reader, and now an author. Writing a novel was a lifelong dream and finally accomplished as an empty-nester. She enjoys reading many genres, but has always been attracted to books with a paranormal theme. As an adolescent, Colleen especially enjoyed the novels of Lois Duncan.

Colleen, the mother of three grown children and soon to be a grandmother of two, lives north of Chicago with her husband. She is currently working on Book 2 in The Fiona Series. Occasionally, she reads cards and palms for neighbors and friends.”

To learn more about Ms. Hein check out her Amazon Author page.

After a series of misfortunate events Fiona’s college plans are dashed. As a result of the tight financial situation Fiona sets off to live with her Grandma Mary in Fireside, Minnesota. Grandma Mary has a reputation as a tarot card reading fortuneteller, who also reads palms and communes with spirits. Fiona is excited by this move, finally she’ll have someone to guide her. Fiona has always heard voices and been able to find lost objects. However, these things were discouraged by her father. Grandma Mary is pleased to be able to pass her knowledge of the occult on to her granddaughter as well as giving her a more detailed family history. Fiona also enjoys hearing stories about her mother growing up.

Fiona is a quick study and starts to make a name for herself in their small community of Fireside. She’s also making friends and feels like she would love to make her move here permanent. However, fate intervenes again and the story takes a drastic turn. Spirit Talk doesn’t have a cliffhanger, but ends with a teaser about the direction Fiona’s life is taking.

My one complaint about Spirit Talk is how many times the tarot cards meanings are gone over. One. At. A. Time. The whole freaking deck of fifty-two cards, three different times. This bogged down and screwed up the pace of the story without moving the plot forward. When authors repeat things like this over and over it gives me the feeling that they are trying to raise their word count. Or don’t trust their readers to be smart enough to catch on. Authors’ please don’t do that! This story, in particular, is strong enough without the repetition of bloated text.

If you want to learn to read tarot cards, this would be a good primer, and you get a story as a bonus.