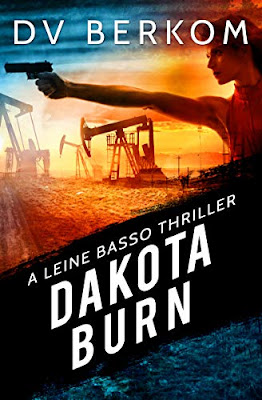 “Former assassin Leine Basso was supposed to be in sunny LA, watching the first class of operatives graduate from the new anti-trafficking academy. Instead, she’s in North Dakota in the middle of a brutal winter, helping ex-poacher Derek van der Haar track down and eliminate a deadly group of criminals hell-bent on providing young girls to the highest bidder.

The closer Leine and Derek get to the organization, the more dangerous the mission becomes. Soon, it’s evident that the traffickers are playing for keeps—and don’t care who they kill.

In a story ripped from the headlines, Dakota Burn reveals the dark underbelly of the Bakken oil fields, where human life is a commodity and outlaws still rule.”

“DV Berkom is the USA Today bestselling author of two action-packed thriller series featuring strong female leads: Kate Jones and Leine Basso. Her love of creating resilient, kick-ass women characters stems from a lifelong addiction of reading spy novels, mysteries, and thrillers, and longing to find the female equivalent within those pages. After a lifetime of moving to places people like to visit on vacation, she now lives in the Pacific Northwest with her husband and several imaginary characters who like to tell her what to do.”

If you’ve read a few books in the Leine Basso series and liked them, odds are good you’ll like the others including this one. You’ll also have an idea of what you might expect. Someone will be involved in sex trafficking. SHEN, the association Leine works for will send her to investigate. There will probably be a few people shot. Some of those could be by the bad guys, some could be by the good guys and even though the legality of what happens is questionable, you’re not at all upset to see it happen. Spoiler alert: Eventually the operation will be shutdown with the major players facing justice, if they survive. Yeah, that’s not really a spoiler because who really expects the protagonist of a thriller to ever not survive?

The basic format is engaging and exciting, but what really sets each book apart are the specifics. Sometimes that’s the specific bad guys and what they’re doing. Sometimes it’s something about this case that is especially a big deal to Leine and the reader. Sometimes it’s the setting. For me, the last two things are what sets this volume apart. The something special is the involvement of Jinn, a character from a prior installment of this series who is now working with Leine. I also found the setting in North Dakota to be interesting and a change of pace. Many books in the series have taken place on the west coast which has been done to death in books, TV, and movies, almost to the point where a southern California location is about as close to generic as you can be. It’s easy to imagine that the oil boom in North Dakota could have had some negative side-effects. The author did a good job of evoking the qualities a rural middle-of-nowhere location like this has and integrating them into the story. As always, Leine let me hang out for an intense and at times gut-wrenching case and I’m glad I came along for the ride.

Thank you, BigAl! Sooo glad you enjoyed the book :-) I think thriller writers should use ND more often--it lends itself to the genre well. Gritty, cold, and some pretty amazing people. North Dakota Noir?

North Dakota Noir, a whole new genre. I like it. :)