Review: Dead in the Water by Donna Collins 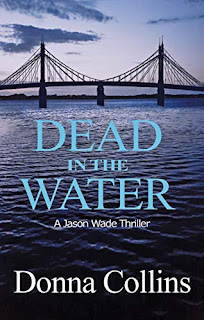 “Jason Wade is an East End boxer-turned-Police Crime Scene Investigator. He likes his job, has a good circle of friends, and is never short of female admirers. But, although on the outside his life looks an enviable one, behind closed doors he has more than one secret hidden away. When a female body is dragged from the Thames, the skeletons from Jason's past quickly begin to resurface and his near-perfect life slowly begins to spiral out of control. But, when a second victim is pulled from the Thames with amnesia, Jason questions if the two accidents are related to each other. With none of his colleagues believing there is a link between the two incidences, and ordered to stay away from the case by his boss, will investigating these seemingly unrelated cases lead Jason to his own downfall, and how many of his friends will he take with him?”

A native of England, Donna Collins is a fan of 70s and 80s TV shows which along with her reading books from the same time period she attributes as the reason she likes dark mysteries and thrillers, not just to read, but to write. Along with writing, Ms Collins has worked for multiple law enforcements organizations, which should give her some different perspectives to influence her storytelling. This is her fourth book.

This was a strange story, and I mean that in a positive way, in that it kept me guessing, wondering who the good guys were and who the bad. Some, with good reason, would say they were all bad guys. Why? Because every member of law enforcement with any significant mention in this story, including our hero and protagonist, Jason, were stretching rules at a minimum, if not actually breaking laws. However, since it is fiction, I found it easy enough to go along with the credo of the ends justifying the means. If we’re going to be fair, had all the good guys strictly followed the rules here, the story would have been a lot different, less entertaining, and not a very satisfying read. As it is this was an intense thriller that kept me interested and guessing where things were headed and how Jason was going to find and prove what he needed to. This is the first of a planned series and based on the ending, I think we’ve got at least one story thread for book two (if not subsequent books as well) setup already.

Author is from the UK and this is reflected in spelling conventions used.