Review: You Can See More From Up Here by Mark Guerin 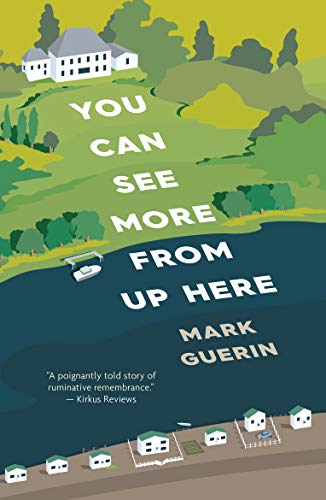 “In 2004, when middle-aged Walker Maguire is called to the deathbed of his estranged father, his thoughts return to 1974. He'd worked that summer at the auto factory where his dad, an unhappily retired Air Force colonel, was employed as plant physician. Witness to a bloody fight falsely blamed on a Mexican immigrant, Walker kept quiet, fearing his white co-workers and tyrannical father. Lies snowball into betrayals, leading to a life-long rift between father and son that can only be mended by the past coming back to life and revealing its long-held secrets. You Can See More From Up Here is a coming-of-age tale about the illusion of privilege and the power of the past to inform and possibly heal the present.”

“Mark Guerin is a 2014 graduate of Grub Street’s Novel Incubator program in Boston. He also has an MFA from Brandeis University and is a winner of an Illinois Arts Council Grant, the Mimi Steinberg Award for Playwriting and Sigma Tau Delta's Eleanor B. North Poetry Award. A contributor to the novelist’s blog, Dead Darlings, he is also a playwright, copywriter and journalist. He currently resides in Harpswell, Maine, with his wife, Carol, and two Brittany Spaniels.”

This book is interesting. As I see it, a coming-of-age story appeals to people for a number of reasons. One is that a coming-of-age story typically has the protagonist going through a difficult situation and we like to root for them to bring the situation to a happy resolution. We feel good about that. It can also be thought provoking as we compare situations like this we’ve been in or, if we’ve never experienced anything quite like this, we can consider how we think we’d react if we found ourselves in the same kind of spot. I find myself on edge, like a good mystery, as the story unfolds and I wonder how the protagonist is going to resolve the issue, hoping the find their way to a happy solution.

This story has all those things that you’d expect in a coming-of-age story, but twice. It’s like the protagonist is coming of age twice at the same time. The contemporary story line has the protagonist, Walker, back in his hometown for the first time in many years and his estranged father in the hospital on his deathbed. Walker is trying to come to terms with a situation that played out thirty years ago that ended with him leaving town and severing ties with his dad. As he’s working through things in the current day, we get one coming-of-age thread that is especially unique for the advanced age of the protagonist going through the crisis. But as he is thinking things through, he remembers the sequence of events that led to his exit thirty years ago, which gives us another coming-of-age story thread that is more in tune with the norm, at least in terms of the age of the protagonist.

I found this story to be engrossing, not only because I enjoy a good coming-of-age story, but also because I could relate to a person of a certain age looking back on difficult life choices and evaluating them, not only in terms of whether they made sense at the time, but also on the results that have come as a consequence of them. It was an entertaining and thought-provoking story that had me wondering what the ultimate resolution was going to be right up to the end.

A small number of proofreading errors and misses.