Review: Scarred Soul of a Grieving Daughter by Bette Hepler 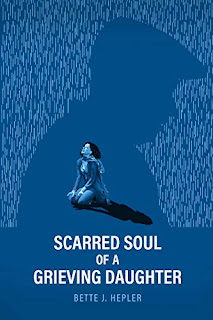 “An accidental encounter with her father's killer leads her down a dangerous road of revenge and murderous madness where the only outcome seems to be total destruction of her or the killer...or both. A psychological drama that portrays the disruption of an idyllic, vital, beloved father-daughter relationship and how the contrasts of the wounds of loss, and development of a kind of justice, payback, and compassion unfold.”

“Bette Hepler is the author of the new novel, Scarred Soul of a Grieving Daughter. Bette grew up in Washington, D.C., earning a Master's Degree in Social Work at Catholic University. She has maintained a private practice in psychotherapy for over thirty years and still loves her work. She's an avid reader of fiction, especially psychological thrillers. Writing a psychodrama was always her dream, and after periods of self-doubt and procrastinating, it became a reality. A tragic event in her life was the catalyst for her to finally write a story in which she weaves her experience and skills as a psychotherapist into a tense-filled drama of truth and fiction. Bette lives in Maryland with her husband, Gary, and, on any given day, when she's not working, you can bet she's engrossed in reading another page-turning thriller.”

Although a novel, the Amazon listing for this book has the tagline “Inspired by True Events” as part of the title. In the “Author’s Note” at the end of the book the author explains that the book started out as a memoir, but then evolved into fiction. At the end of the main story the author psychoanalyzes herself, to a point, explaining why she thinks what started out as a memoir turned into something else. An addendum or supplement section even includes some of the sections cut from the earlier drafts of the book when the author made the decision to switch to fiction. All of that is interesting as background. Once you’re read the main story you might want to peruse the author’s note and the supplement, but ultimately that’s not the main story here.

The main story is interesting because, in spite of the reworking I later found out had been done, it felt like a memoir at first. I knew it was fiction, with some truth (that “inspired by” part) but exactly how much wasn’t clear. As things progressed it started feeling like fiction, but where the line between truth and fiction landed was not very clear. This was a positive in one way. The “memoir like” aspects gave the story more credibility (the protagonist and the events that happened to her that set the foundation of the story felt real, because she was real, as were the story’s foundation). But it also left me feeling off balance and thinking strange things. “Is this real-life therapist really treating the guy who killed her father? Is she going to kill him?” Not knowing where the lines were made it easier to believe, but harder to imagine some potential outcomes or to even seriously consider what I think I might do in the same situation. So, this aspect had both pros and cons. Whether fact or fiction, or some point in between, it was a heart-wrenching story that should get your mind reeling and struggling with the possibilities of what you might do in the same situation.