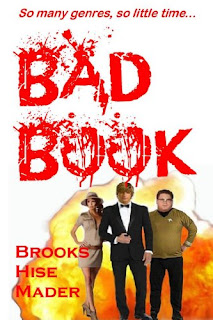 “The name’s Case. No first name. He is a man among men and therefore only one name is sufficient. Women want to smack him – men want to smack him, too, just harder. Join Case on his epic travels through multiple literary genres as he ruins horror, space-adventure, noir detective, spy-thriller, westerns, classics of literature, pop culture icons and more with his own unique panache.”

K.S. Brooks has written everything from thrillers to children’s books (I count eleven, not including those where she was a coauthor or contributing author, which adds another handful – the number of fingers on Honey Boo Boo’s hand if you count this book). Ms. Brooks is also the administrator of the website Indies Unlimited.

Stephen Hise is the author of the suspense novel Upgrade and has contributed to several others including Creepier by the Dozen, a short story anthology written by Hise, his son, and his daughter. He’s also the founder of the Indies Unlimited website.

JD Mader has two novels to his credit, a short story collection, and a collection of essays to scare any dad-to-be, You Hate Me Because I’m Pregnant (a survival guide for expectant dads). He’s also contributed to and co-written several others.

For more, visit the individual websites for Brooks, Hise, and Mader.

Humor may be dependent on the reader, but if you can’t laugh at this book, you must have had a funny-bone-ectomy as a child. The laughs started with a disclaimer that begins …

Bad Book meets or exceeds the recommended daily allowance of vowels and consonants, and is safe and effective when used as directed. Use of Bad Book in any manner inconsistent with its intended purpose nullifies its warranty, which is neither expressed nor implied.

… and finishes with, “If you experience an erection that lasts more than four hours, congratulations.” It only gets better from there. As the hero (villain, idiot, or at least protagonist) Chase bounces from genre to genre the authors poke fun at every one with references to the wild (or is it mild) old west and even the books J.K. Rowling wrote before The Casual Vacancy.

I felt a tap on my shoulder and tottered around to see some geezer dressed in a long gown and a pointy hat like that old dude in that book about that weird little kid that goes off to some magical school to find a ring. What’s the name of that thing again – “Hobbits Take Manhattan,” or something like that.

How could you go wrong for less than a dollar to get your own copy of the Kindle Edition. (Hurry, they may try to cash in on the critical acclaim and bump the price up to three digits. Even split three ways, they’ll be hundredaires in no time.)

Thank you for the reprise review! :)