Review: Angel in the Details by Elizabeth Corrigan 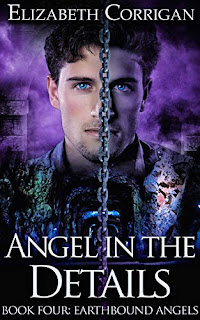 Michael is supposed to be the Leader of the Host of Heaven’s angels, but lately he spends his days ignoring his responsibility and going on the offensive against demons. His extracurricular damnations couldn’t avoid the gaze of Hell forever, though, and before long, he finds himself captured by the demon Asphodel.

As Asphodel tortures a despairing Michael, Heaven’s second-in-command, Gabriel, sends former demon Bedlam to look for the missing archangel. Bedlam wants nothing to do with a Heavenly mission, especially one that involves helping Michael, so he decides the best way to never get another order is to disobey this one. Instead, he drags his friend Khet on a road trip that may change their relationship forever.

While Bedlam shirks his duty, Asphodel spins a web around Michael. Can the already-broken archangel discern truth from fiction in time to escape? And if not, will he be able to face the real motivation for his kidnapping when it finally comes to light?

Archangel Michael, who is Leader of the Host of Heaven’s angels, is in the middle of having a mental breakdown. While ignoring his responsibilities for the last three months he has taken up demon killing 24-7 to relieve the emotional stress whirling around in his head. Jophiel, the angel of service, tries to talk sense into Michael to get him back at his duties in Heaven, to no avail. Humans and demons alike were starting to take notice of Michael. One demon in particular, Asphodel, an incubus who proclaimed himself “The King of Lies.” He manages to kidnap Michael and chain him in a secret cavern network of several caves that negate angels’ powers.

When Gabriel cannot locate Michael he enlists Bedlam to find him, while he looks for someone to introduce him to the field angels. These are the angels who answer people’s thoughts and prayers on earth. Siren, the angel of honesty, offers to introduce Gabriel herself. For the price of a job, to be Gabriel’s second in command. She doesn’t feel like she has a purpose and wants to belong somewhere.

While Michael is being mercilessly tortured by Asphodel and his web of lies. Michael is forced to endure Asphodel’s pleasure palace (snort). However, in-between sessions, Michael closely reviews his emotional stress points from the past to come away with a more truth based assessment.

Bedlam decides to take Khet/Cassia on a long road trip to avoid looking for Michael. Of course chaos/comedy ensues. The chapters are devoted to each angel so we get the story told from their point-of-view. Since everything is happening in different locations at the same time. I have decided I really like Siren, and she took on a large assignment enlightening Gabriel. It’s going to be interesting to see how this new arrangement works out. I do feel like the ending was a little rushed. I wanted more between Michael and Cain/Cassia at the end.

Angel in the Details is book 4 in Ms. Corrigan’s, Earthbound Angels Series. This series is best read in order, starting with book 1, The Oracle of Philadelphia.

A small number of proofing issues, nothing that threw me out of the story.