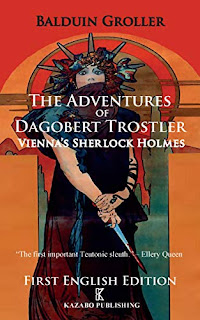 “Dagobert Trostler is the Sherlock Holmes of Vienna . . . with a twist. Like Holmes, he's the most famous private investigator in Vienna. Unlike Holmes, he's a bit of a party animal. While he loves a good mystery, he also loves good food, good company and a good time. He's a bon-vivant and right at home in the brilliant social scene of Vienna in the heyday of the Austro-Hungarian Empire.

These stories, written by Balduin Groller and published in Vienna between 1889 and 1910, are a glimpse into the sparkling, forgotten world of turn-of-the-century Vienna. Hugely popular in the German-speaking world, they are now available in English for the first time exclusively from Kazabo Publishing. If you love Sherlock Holmes, you need to read these stories!”

“Balduin Groller, born Adalbert Goldscheider in what is now Arad, Romania, in 1848, was one of pre-war Vienna's most successful and popular journalists. Familiar with Viennese high society, he was also the founder of what became the Austrian Olympic Committee.”

When I decided to give this book a read, I was looking for a change of pace, and I definitely got it. The comparison of Dagobert Trostler to Sherlock Holmes intrigued me, not only the similarities, but the differences. It’s been a long time since I’ve read any Sherlock Holmes, but based on my vague memories of doing so, I think the comparison holds up. The short discussion in the foreword about the differences between the society Trostler’s story is set in compared to that of Holmes was interesting and planted the seeds in the back of my mind so that I took notice when those differences showed in Trostler’s actions. The original publication of these stories was around the same time as Holmes was also being published. (Both sets of stories were contemporary, at the time of first publication.) Translating and publishing this version in English at that time would seem to have been a good idea. However, whoever wrote the foreword for this volume feels that these differences in society were what kept that from happening at the time. For me, those differences were a big part of my enjoyment and what I thought was unique about this book.