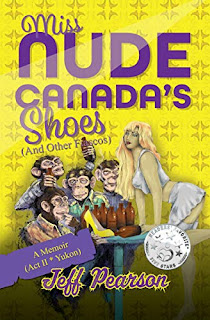 “Sooner or later, everyone comes face to face with a fiasco--even the innocent, angelic types like Miss Nude Canada circa 1986. Generally speaking, fiascos, which thankfully come in many different forms, are events where the caca hits the fan; there's failure, breakdown or catastrophe of some sort and everything just slithers off of the rails in a sickening, sideways fashion. Human idiocy, in all of its glorious manifestations, is often the fiasco's prime catalyst with ego-squashing humiliation its necessary outcome. Fiasco-prone humans with an above-average surplus of caca-splattered fan-blades in their closets have many (sordid) tales to tell. Mr Pearson, the floor is all yours ....

In bars and taverns, on a Reserve, in a motel room, on a mine site. On lakes and rivers, in a canoe, on a raft, in the backcountry, on top of a moose. With homeless hobos in an inner city slum. And the question then begs to be asked: is life just one, long, continuous chain of calamitous fiascos?? (Answer inside).”

“Jeff Pearson was born in Pembroke, Ontario, Canada in 1963 and attended Carleton and Lakehead Universities where he mostly majored in Maximum Intoxication / Fiasco Production. Then he went vagabond—rambling / exploring / travelling / working—for years … all over Canada and beyond. He kept detailed journals and has been writing down something or other for over thirty years: poetry, short stories, song lyrics, a novel and now a memoir. For the past twenty years he has been manning various fire towers deep in the Canadian wilderness.”

This is the second part of a three-part memoir trilogy. Just like the first part (and presumably the third part as well) this second part is made up of humorous, non-fiction stories of adventures (or fiascos as the title and description call them) that the author experienced a few years ago. (These experiences happened as long ago as 1989.) If you’re looking for the fiasco involving Miss Nude Canada, you’ll want to start with the first part of the trilogy.

If you read and laughed at the first installment of the trilogy like I did, you’ll find yourself laughing and enjoying your read of this as well. Whereas Part 1 mostly involved things closer to Mr Pearson’s hometown in Ontario and his adventures traveling south through the US and into Mexico, which obviously involved a bit of culture shock and adaptation to cultural differences, this book focuses on adventures and fiascos that happen in The Yukon. This is an area of Canada that has its own set of unique aspects which add to the story. As an extremely rural area, much of it with very few if any people at all, the stories tend to involve a lot of things happening outdoors in more natural settings with many more moose and bear figuring into the stories than with the stories from points south. My favorite was probably the one involving the long, end-of-season solo kayak trip that … well, it turned into a bit of a fiasco, just as advertised.