Review: That One Time I Broke into a House, Killed the Homeowner, and took his Family Hostage by JDG 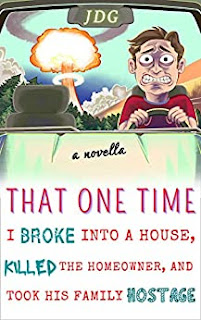 The narrator flees Washington, DC just ahead of a feared nuclear attack. When he hears an explosion and sees a mushroom cloud in the distance, he knows that he has to take cover if he’s going to survive. So, the first house he sees in the rural area he’s traveling through becomes his designated bunker. He stops, knocks on the front door, and things take a turn for the strange.

The over-long title of this novella pretty much tells the story of what happened after the narrator flees Washington, DC for rural West Virginia, just ahead of a nuclear bombing of the city. When he tries to find a place to hole up, quite literally in a basement or other safe place, things take a turn for the worst. His fight for survival becomes more immediate and it might seem that no matter what he does, things just get worse.

If that sounds like the story is intense, it is. Yet there’s also some humor in here, the name of the president, President Covfefe, for one small example. That makes for a strange, unique, and entertaining mix.