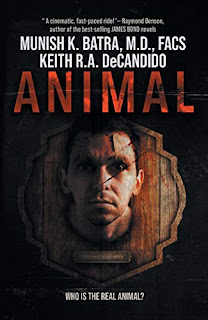 “Two grisly murders are committed at a meatpacking plant by a person wearing a cow mask…not long after the CEO of a water park is brutally killed by someone wearing an orca mask.

Interpol Agent An Chang believes these are the latest acts of a ruthless serial killer he has been chasing for more than twenty years…a killer who targets those who harm innocent animals.

Those who torture animals are not safe…

Working with two California detectives, Chang races to unmask the killer, as his spree ramps up. But the killer’s motives and history are far deeper than anyone realizes, and the truth of his rampage leads on a wild chase from the streets of Shanghai around the globe…

Animal is a relentless thriller by renowned surgeon and humanitarian Dr. Munish K. Batra, in collaboration with international best-selling author Keith R.A. DeCandido. This thought-provoking, pulse-pounding novel will engross and enthrall. Do the most noble of intentions justify the most horrific acts?”

“Dr. Batra is currently collaborating with Keith R.A. DeCandido on other fiction projects, and is also working on a nonfiction book called Medical Madness. He also enjoys Brazilian jiu-jitsu, yoga, and meditation. His wife Pooja and their three young children, Ayaan, Kairav, and Kiara, offer him constant encouragement and support.

Keith R.A. DeCandido is the award-winning, best-selling author of more than fifty novels, almost a hundred short stories, a smattering of comic books, and a ton of nonfiction.”

“Do the most noble of intentions justify the most horrific acts?” That question is the big one that is at the root of this book. The story, a crime thriller with a couple California police detectives and an Interpol agent looking for a killer, is a good detective story, but the question of whodunit is pretty much answered early in the book However, it leaves the detectives with plenty of other questions. Why? Who’s next? How do we find our suspect and stop the murders?

Then we have that big question quoted above. When is the killing of animals okay and when isn’t it? Is the killing of humans ever justified to stop the killing of nonhumans? Is the killing of a cow to provide me with my burger more forgivable than the killing of an endangered and rare gorilla or elephant for reasons of sport or profit? Is the torture through force feeding of a duck before slaughtering it to get foie gras for human consumption worse than just killing a cow to get those steaks? What if the animal being killed for food is something we might not picture as food, but may be considered food in other countries, like a dog for example? I don’t have the answers, but reading and thinking about this story sure got the questions roiling around my brain.