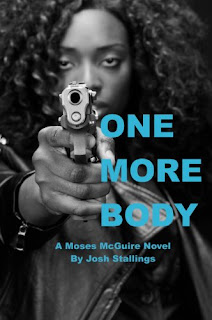 Moses McGuire is lost, staying hidden in Mexico with the ghosts of his past. Until he’s approached by Rollens, a detective who claims her niece has been taken and sold into a life of child prostitution. McGuire reluctantly returns home to help. But all is not as it seems and McGuire is drawn into a messy world of crime and desperation.

Josh Stallings has had many occupations in life – from criminal, to taxi driver to club bouncer. On the creative front he has written and edited prize winning films, some in partnership with leading writers such as Tad Williams. More recently Josh turned to novels. One More Body is his fourth book. He currently resides in Los Angeles with his wife and several pets.

This is the third installment comprising anti-hero Moses McGuire, after Beautiful, Naked and the Dead and Out There Bad. It opens with McGuire in a bad way, existing in Mexico, riddled with guilt, talking to a ghost and pelting back prescription drugs and alcohol in equal measure.

In effect, the story takes up where Out There Bad finished (although each of the books operate as stand-alones). Once Rollens appears on the scene McGuire slowly begins to take a grip on his life through helping others. He’s a bad guy with a big heart, an excellent character who’s as frail as he’s strong.

The story moves along at a fast pace, flipping between first person (McGuire) and third person (the kidnapped girl, Freedom). As McGuire rises from the depths he’s cast himself into, Freedom sinks down into a grim world of child prostitution, exploitation and murder. It’s here the writing is at its most graphic - Stallings takes no prisoners when he describes scenes of abuse. The pill isn’t sweetened in the slightest.

What is very interesting and incredibly well done is how the writing style reflects McGuire’s mental state. At the outset he’s lost, guilt ridden and off his face on narcotics and the prose matches it. Then he’s drawn back to LA and begins to find a degree of purpose, but his world is still confusing, he’s not sure which way is up. The writing tightens, but still has a vague quality running through it. Then McGuire comes off the drugs and is entirely focused so the style shifts with it – to clipped and direct sentences. It’s clever and very well done.

Here’s an example of the writing:

I fired a second shot into the windshield. The concussion sent a million chunks of glass spilling back. It tore a three-inch hole through the seat before ripping out through the trunk. The safety glass bloodied up the bangers pretty good, but they showed good form, not a wail or a moan.

Plenty of swearing and graphic scenes.