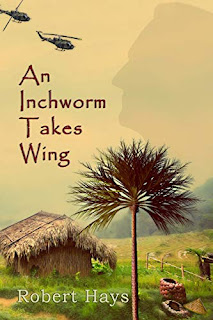 “In the tranquil solitude of a darkened Room 12 in the ICU on the sixth floor of Memorial Hospital’s Wing C, a mortal existence is drawing to an end. His head and torso swathed in bandages, his arms and legs awkwardly positioned in hard casts and layers of heavy gauze, he’s surrounded by loved ones yet unable to communicate, isolated within his own thoughts and memories.

He does not believe himself to be an extraordinary man, simply an ordinary one, a man who’s made choices, both good and bad. A man who was sometimes selfish, sometimes misguided, sometimes kind and wise. A man who fought in a war in which he lost a part of his soul, who then became a teacher and worked hard to repair the damage.

When faced with the end, how does one reconcile the pieces of an ordinary life? Does a man have the right to wish for wings to carry him to a summit he believes he doesn’t deserve to reach?”

“Robert Hays is the author of five previous novels and has written, edited, or collaborated on a half-dozen works of non-fiction. His short stories have appeared in anthologies and he has published numerous academic journal and popular periodical articles. Selections from three of his novels have gained Pushcart Prize nominations. He is a U. S. Army veteran and, though retired from classroom teaching, holds professor emeritus rank on the faculty of the University of Illinois. He lives in the beautiful southern Illinois wooded hill country about which he writes.”

It’s probably obvious to most people that any particular book is going to resonate with some people more than others, depending on the specifics of the reader’s life and experiences. I suspect those who have been in the military, especially during war, would be at the top of that list. But really anyone of a certain age who is old enough to remember the Vietnam War or anyone who has had friends or family serve in the military during an armed conflict are likely to find this story speaks to them. If you’ve come close to death and done the cliched evaluation of your life, you’ll get it too. But ultimately a person doesn’t have to have experienced something close to what a book’s protagonist has to imagine themselves in that position and learn from it. This is one that everyone could benefit from to some degree.

Hopefully without saying too much about the plot, An Inchworm Takes Wing is the story of a man who was in a bad car accident and is now in the hospital, alive and able to think, but unaware of what is going on around him. He knows he’s alive, but doesn’t know how likely he is to survive or become conscious of anything outside of his head. He’s done some good in life, but also some things he’s ashamed of. He’s struggling in his own mind, hoping he’ll have a chance to try to correct or at least apologize for some of his mistakes and haunted by those things he’ll never be able to fix. In the meantime, his loved ones are holding vigil in his room, going through their own struggles.

This book is unique, both the story and the structure (how many books have you read where the protagonist was unconscious), but it should get you thinking about life, what’s important, and possibly even what you hope your own legacy to be.

Review is based on an ARC (advance reader copy), so I’m not in a position to judge the final product in this area.