Review: All in The Name of God by James Weir 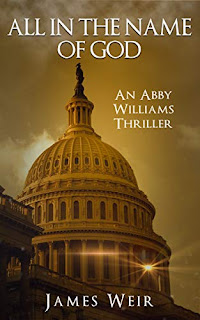 “In this fast-moving dystopian thriller, Evangelicals have taken over the United States government. Weaponizing religion, they have imposed their agenda. Term limits have been abolished, giving the President unprecedented power. Homosexuality is a criminal offense. Muslims have been made second-class citizens, and have lost their right to vote. Women no longer control their reproductive rights. Information is controlled and monitored by a covert government agency called The Slayers. The Department of Cultural Affairs keeps a tight rein on the freedom of American citizens.

Abby Williams, a former army weapons specialist, vows revenge after her girlfriend is murdered during a botched DCA raid. On the run after escaping from a government conversion center, she meets up with Kyla Dirksen, the Governor of California. Plotting with like-minded people to defeat President Wilson Wright and his band of accomplices, they work to overthrow the dictatorship that the American government has become. Will they succeed? Or will the unbridled repression continue?”

“A life-long fan of action thrillers, James Weir has always wanted to be the next Tom Clancy or Clive Cussler. All in the Name of God is the result, his first book in the Abby Williams series. When he's not busy figuring out plot twists and turns, James is a small animal veterinarian. In addition to clinical practice, he holds graduate degrees in pathology and in public health. He has also worked as a stand-up comedian, and has four published works of funny haiku poetry.”

By definition a dystopian novel takes a political direction that some people perceive as the right one, imagines movement in that direction resulting in a slide down a slippery slope, and the extreme result that might come about. Not only is the story a vicarious adventure for the reader as you hopefully pull for things to work out in the favor of the protagonist, but if you’re paying attention it should get you thinking. Sure, the idea of a slippery slope is usually a fallacy, but not always, plus you’ll hopefully consider whether any movement in the direction being considered is a good idea.

The story here is a good one. The direction that resulted in the start down the slippery slope is definitely one that some people would like to see and in some ways this was hitting a bit too close to home based on some current events. In other words, the story is everything I look for in a dystopian novel. However, there was one big problem I found. If this book was proofread, the proofreader did an atrocious job. None of the issues I saw were especially bad, running from homonym errors (waive instead of wave) to little words like ‘a’ or ‘to’ missing from the sentence, to an extra or missing character (‘he’ instead of ‘her’ for one example), but the sheer number of these was well beyond what is acceptable. A bit (okay, a lot) more polish in this regard and I’d recommend this book. As it stands, only if you’re much more tolerant of these kind of issues than I am.