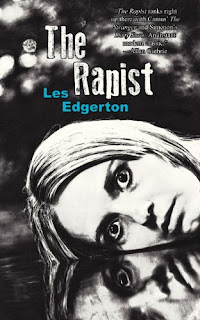 Meet Truman Ferris Pinter, a self-confessed rapist and murderer, currently residing on death row, hours away from his execution.

Les Edgerton is the author of fifteen books. He is an ex-con and served two years for a single charge of burglary, reduced from 182, two strong-arm robberies, an armed robbery, and a count of possession with intent to deal. Today, he's completely reformed. Prior to this Les served in the U.S. Navy as a cryptographer during the Cuban Crisis and the beginning of the Vietnam War.

If you’ve read the author bio you’ll probably appreciate that I approached The Rapist with a degree of trepidation – Les Edgerton is one scary dude. In addition the subject matter would probably be difficult. The cover, of a woman’s face, eyes sightless, is haunting.

Socially inept (a gross understatement) and incredibly self-important, Truman is a strange guy. At the outset we meet Truman in prison, he’s on death row having been found guilty of the rape and murder of a young woman. Through the initial part of the story Truman admits and even justifies his actions in a quite unique voice. He feels morally justified in his actions because of who she is and who he is. He is a class above.

Here’s an example from the outset:

A rape scene but not overly graphic.

Added for Reprise Review: The Rapist by Les Edgerton was a nominee in the Thriller category for B&P 2014 Readers' Choice Awards. Original review ran November 17, 2013

AL, what a truly nice surprise! Thank you so very much for reposting this. This was the hardest book I've ever written and I felt like I was taking a lot of chances writing it. That you liked it and still do means an awful lot to me. Thank you. Blue skies, Les

Sorry, meant to say thank you to Keith Nixon!