Reprise Review: Flaps Down: The Reluctant Hero by Jackie Weger 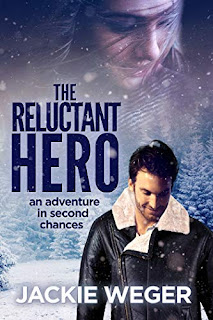 “Parnell Stillman, ace pilot, is man to the bone in a lackadaisical kind of way. He has the ability to fly through anything except solid mountain. He lives alone because people are not to be trusted—especially women... Mischance forces his plane down in a frozen wilderness. He can survive, but his live cargo is another matter--an annoying social worker and five orphans--the most irksome freight he’s ever hauled in his life.

Rebecca Hollis is distraught. The orphans have missed their chance for parents... She determines to force the obnoxious, disagreeable, self-centered pilot to do what is necessary to insure the survival and rescue of the orphans by Christmas Eve… Even if it means making the noble gesture of keeping her mouth shut—or other womanly things... But the pilot isn’t having it... He’d rather dance with a grizzly or wrestle a puma than give his heart over to a sly, conniving, wily do-gooder. He has no intention of playing the hero...”

Jackie Weger “…began writing romance novels in the 1980's while living in a small farming town in Texas and is an award-winning contemporary romance writer. She published sixteen novels with Harlequin Books and is now bringing her five-star favorites to the e-book community.”

To learn more about Ms. Weger visit her blog and/or her Facebook page, she loves to chat with readers.

Parnell is pretty much a typical man who has been burned by a bad relationship and hard times, but he does have a unique history that has caused him to build extra-strong walls around his heart. He is bitter and shares that bitterness at inappropriate times. Rebecca has built her own walls, but her intuitive nature helps her realize and come to terms with her misgivings and misconceptions way before Parnell sees the light.

I could see that without having been put in these extreme circumstances these two probably would have never been able to find true happiness. Their struggle to survive in the snow covered wilderness and keep the kids safe was realistic. I especially loved the relationships between the children. They were a diverse group of unfortunate orphans who had learned to depend on and help one another rather than rely on unknown adults who had so often let them down. Parnell was unknown to them and he had to earn their and Rebecca's trust. The kids were honest and outspoken with their realistic view of the world.

Ms. Weger's writing style is honest and down-to-earth. Her characters are well developed, realistic, and draw you in quickly. As disagreeable as Parnell was I still rooted for him despite all of his bluster and scornfulness. I could tell it was going to take a strong-willed woman to temper him, I wasn't sure Rebecca was that woman or not for most of the story. She had her own insecurities and issues to deal with and work through. Although she proved to be just as hard-headed as Parnell, she eventually learned when to drop her defenses. The dance these two shared on their journey was captivating and the plot was well paced. Even though this story takes place around Christmas, it could be enjoyed year round. I think this is my favorite book of Ms. Weger's so far.

Flaps Down: The Reluctant Hero has some adult situations that are tastefully handled and I enjoyed them.

Added for Reprise Review: Flaps Down: The Reluctant Hero by Jackie Weger was a nominee in the Romance category for B&P 2014 Readers' Choice Awards. Original review ran December 16, 2013.

I did find a small amount of editing errors but not enough to deter my enjoyment of this book.