Review: Crossing Over by Paul Clayton 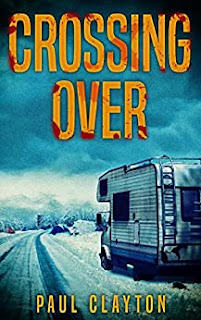 “Crossing Over by Paul Clayton tells the story of an American family trying to survive the beginnings of the second civil war. Set some time in the not-too-distant future, the existence of two simultaneous presidents has split the country along ideological lines. The protests are becoming violent, sections of the country have formed their own militias, along with the militias of the two warring parties. In the midst of shortages of food and other necessities, gangs and thugs are terrorizing formerly safe neighborhoods. Realizing that it is no longer safe to remain in their home, Mike McNerney decides to pack the camper and flee to Canada with his wife, Marie, and disabled teenage daughter, Elly. Unfortunately, everyone else has the same idea.”

Paul Clayton is the author of several books, many of them taking places at times in the past, and some in the future.

This book has a few things going for it. The most obvious is the main story conflict, will the McNerney family, Mike, Marie, and Elly, succeed in their attempt to flee to Canada? Just accept the premise of the story and go with it, and you’ve got an interesting thriller with characters I wanted to see safely make it to the other side of the border. But if you want more, let your mind wander, mulling over the premise of the story of where the US has gotten itself, how that is said to have happened and what the results were. I found myself asking and pondering lots of questions. How realistic is this? What would it take to go this far off the rails? If things were headed this direction, how would I react? Are Canadians complaining about the country south of the border with refugees invading their country? Do they complain that we aren’t sending our best people? Yeah, my mind goes in some strange directions sometimes. Hopefully we aren’t headed for anything resembling this story. But as something to get the thoughts going, as well as sharing an intense adventure vicariously with the McNerney family, it did the trick.

Thanks for your review, Al. I appreciate it very much!