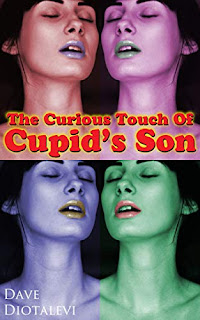 “Karl Sparks knows everything about love except how to fall in it.

What he does know it that his touch--however slight or incidental--rockets any woman into the most intense and dizzying orgasm of her life, whenever and wherever it launches (a Midas-touch curse he would do anything to be rid of).

Happens 100% of the time--that is until he literally bumps into Aurora (Rory) Sky, who does know who her mother is (she thinks). Karl's touch has no effect on her, and to her surprise, the unnatural ability she's always owned of infallibly controlling men through her verbal commands fails to faze Karl.

Her presence does give Karl his first erection.

She, unable to trust any of the men she mystically dominates, and he who can't touch women--shouldn't these two misfits who only fit each other find romance? Fall in love? Get intimate? Become lovers?

They discover secrets about themselves and each other in a series of laughably lusty adventures to find the three pieces of The God Prism, a mythic relic capable of lifting their cursed abilities.

The unwitting lovers' passion deepens until it's ultimately tested by a selfless choice of sacrifice and devotion.”

“Dave Diotalevi was trained in nuclear physics and engineering, but has traded up to the fusion of words. He is a published nonfiction author and poet, and has also written feature articles for national magazines. In addition, he created a trademarked temporary tattoo language system that was licensed to a national marketing corporation.

For relaxation, Dave runs every day, and has an ongoing continuous streak of over thirty years. Dave said, ‘To keep a running streak like this going, you have to be both stubborn and lucky.’ Those who know him can tell you which outweighs the other. Dave lives in central Massachusetts…”

I found this info on his blogger page for his first novel, which is no longer on Kindle. Mr. Diotalevi has two Young Adult eBooks available, My Year AtoZ and Love Potion Homework. He also has a Facebook page.

Karl Sparks is a thirty-something man who is writing a book about love. He was raised in a Catholic orphanage, has never had a girlfriend, or an erection. However, an accidental touch of any female sets her off into an uncontrollable orgasm. Which is why he wears long sleeves and surgical gloves. That is until he literally bumps into Aurora Sky when he is quickly exiting a crowded elevator trying to put distance between the puddle of a woman in the midst of an orgasm and himself. Bumping into Aurora (Rory) causes her to drop several files on the floor. When she orders Karl to pick them up for her. He doesn’t do as she mandates. Aurora is intrigued. All other men bend to her commands, but not Karl. Karl does however, get his first erection!

The Curious Touch of Cupid’s Son has more twists and turns than a roller-coaster. Several secondary characters are as well developed as the main characters. Lacy and Tommy, downstairs neighbors were an integral part of the story, they added dimension and humor to the tale. Rory’s boss is on a mission to locate the three pieces of the God Prism, an ancient artifact from Greek mythology. It’s evident that she is an unpleasant person, but gives no clue of the evil nemesis she really is. This is an engaging story I really enjoyed. There are several elements that are seamlessly woven together. The sex scenes are outshined by the storyline, thus becoming secondary. The parentage of Rory and Karl become intertwined with the God Prism and they are vital to reassembling the artifact. While there is a heartwarming scene toward the end, the ending is heart wrenching. In my mind I worked my heart around a more satisfying ending which could very well happen.