Review: Meet You Under the Stars (Morgan's Grove Book 2) by Traci Borum 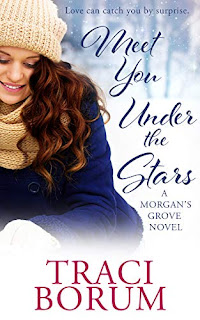 “Chaynie Mayfield is the absolute last person who should be heading up the Morgan’s Grove library Valentine’s event. Ever since her boyfriend dumped her last year—on Valentine’s Day—she’s had a hard time believing in love.

When Greg Peterson, handsome architect and former schoolmate, is commissioned to oversee the library’s renovations, Chaynie’s spirits are instantly lifted. Greg helps her brainstorm, and they create an ‘Under the Stars’ theme that promises to deliver a magical night for the entire town.

The longer Chaynie and Greg work together on the romantic project, the deeper their attraction grows. But when her dream job comes calling, Chaynie must decide whether her future aspirations are worth the price of leaving a town, a family, a library she adores, and a love she’s not sure she can live without.”

Traci also adores all things British and is completely addicted to Masterpiece Theater---must be all those dreamy accents! Aside from having big dreams of getting a book published, it's the little things that make her the happiest: deep talks with friends, a strong cup of hot chocolate, a hearty game of fetch with her Corgi, and puffy white Texas clouds always reminding her to ‘look up, slow down, enjoy your life.’"

Chaynie Mayfield is at a crossroad in her life. She moved back home to Morgan’s Grove after her father’s death to help her mom. She got a job at the local library, which is near and dear to her heart, to work as an assistant to the head librarian. It’s been a year and a half now and she wants to spread her wings and apply for her dream job as a head librarian.  When the library receives a large endowment for much needed renovations, Greg Peterson is commissioned to oversee the projects. Greg is an architect who has moved his business to his hometown of Morgan’s Grove. He is also a former schoolmate of Chaynie’s.

Chaynie has been tasked with creating a Valentine’s Day event sponsored by the library. Greg helps Chaynie brainstorm ideas for the event. He also learns that the children’s alcove is one of Chaynie’s favorite places in the library. Greg strives to turn the alcove into a storybook setting for her, and the kids of course.

Meet You Under the Stars is told from Chaynie’s POV so we get to see her insecurities. The characters are well developed, diverse, believable, and enjoyable. The plot is charming, cozy, but moves slow, similarly like the township of Morgan’s Grove. Ultimately Meet You Under The Stars is more about relationships than a romantic genre story, which is misleading. There are some interesting twists that help the story along including a couple surprising game changers at the end. So, I am torn. I would rate this book a four-stars as a Women’s Fiction. However, I would rate this book a three-star as a Romance, or perhaps two-stars as there is no male perspective. Romances generally have both perspectives and at least a slow burning emotion. Both the book’s classification on Amazon and the impression given by the book’s description indicate the reader can expect a book in the romance genre, but it doesn’t deliver on that promise.

Meet You Under the Stars is book 2 in Ms. Borum’s Morgan's Grove series. Each book is a standalone novel.