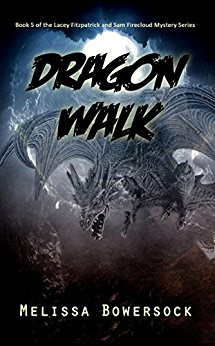 "Four months ago, a pretty young marathoner disappeared while training on the isolated trails of Griffith Park in Los Angeles. The police have few leads, no witnesses and no results. As a last resort, they call in private investigator Lacey Fitzpatrick and Navajo medium Sam Firecloud to pick up the rapidly cooling trail. Sam and Lacey, however, are on the outs. Their efforts to take their relationship to the next level failed miserably, and now they must redefine their working relationship, as well. Can they find the murdered girl and her killer, and still hang on to their partnership?"

Seriously, dragons? Madison McClure, a twenty-six year old female jogger, disappeared four months ago while jogging in Griffith Park. The police have no leads or clues to follow and the case is growing cold. Maddie’s desperate parents, Esther and Randall McClure, want to call in Sam Firecloud and Lacey Fitzpatrick. Luckily the chief of police agrees to contact them as long as their investigation remains off the record.

While interviewing Esther and Randall, Lacey and Sam learn that Esther is an artist. When Maddie was young Esther would often throw a blanket over the back of her easel to make a magical cave for Maddie to play in while she painted. When Maddie grew up she was fascinated with dragons and channeled her artistic abilities into making intricate jewelry incorporating dragons from silver and gold. She was also half owner in a boutique jewelry store named Dragon’s Den in Los Feliz with Vanessa Medina, another artist friend with similar interests.

With mixed signals at every turn and the vast area around Griffith Park, even Sam and Lacey are confused.  After pinpointing a direction to focus their search, again things start looking dim. The twists and turns of the plot are captivating and enthralling. The ending will leave your jaw dragging the ground and the emotions will leave you overwhelmed. This is a tough one to wrap your head around. Well done, Ms. Bowersock.

I should also comment on Lacey and Sam’s relationship. Things are a little rocky at first, but they seem to be negotiating their situation with a lot of thought. The ball is in Lacey’s court and she decides to make her amends with Sam’s kids while she puts Sam on the back burner. He’s not going anywhere soon, their business partnership is too important to both of them. I want to thank everyone who pushed Ms. Bowersock to continues this series.

Dragon Walk is book five in A LACEY FITZPATRICK and SAM FIRECLOUD MYSTERY SERIES. Each of these mysteries can be read as a standalone if you choose. However, I am enjoying the relationship developing between Lacey and Sam, so I would recommend reading from the beginning to get the full benefit of their storyline.