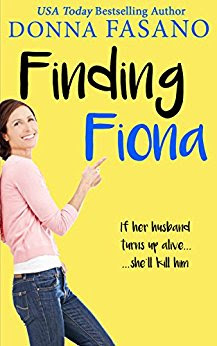 “If her husband turns up alive—she'll kill him!

Explaining to the seriously sexy cop why she hasn't noticed her husband has been missing for three days is both embarrassing and sobering. But the day Fiona Rowland lifts her head above the churning chaos of kids, carpools, and a million things to do, annoyance turns to fury...then to worry. Where is Stanley?

Having one of those wake-up-and-smell-the-coffee moments changes the way a woman looks at things: marriage, money, family, and friends. And when her best pal from high school arrives (packing her own secrets) to lend support, it turns out even the past isn't quite what it seems. Scrambling to make sense of the drama unfolding, Fiona discovers there's an upside to having your whole world turned upside down. It's easier to grab the good stuff.”

Finding Fiona is many different, sometimes contradictory things. It starts with a mystery. Where’s Stanley? Fiona’s husband disappeared and there aren’t many clues as to where he might be. There’s romantic comedy in a few different ways as romance threatens to take hold, but there are times when the romantic side of things is way too serious to be funny. Fiona’s best friend from her high school days stumbles into the middle of this crisis and alternates between helping and exacerbating the situation.

This was a fun story that kept me guessing, both about the mystery part, but also the romance and relationship part. I wasn’t sure who was going to end up with who, or how the different conflicts would resolve. It kept me guessing and, even more importantly, I liked the characters enough to care how it turned out.

Thank you for the great review! Books and Pals is such a wonderful place for Indie Authors. Thanks for all you do!