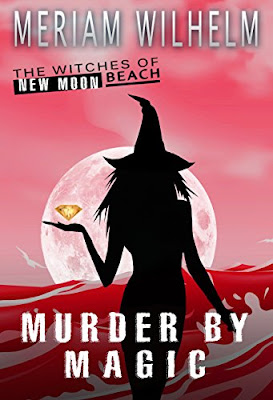 The word outsider describes Ola Mae Masters to a T.

Orphaned at the young age of seven and tucked away in a swanky orphanage, run by a group of dismissive nuns, the life of Ola Mae Masters is anything but normal. Especially when she realizes that it’s ghosts she sees walking and talking in the local graveyard. Shunned by her peers for being different, Ola Mae is constantly barraged by the unspoken thoughts and feelings of everyone she meets. But how is that even possible? Alone, confused and longing to be a regular kid, Ola Mae must wait until she grows up to seek her own “normal”.

Degree in hand and on a quest to create a new life for herself, she lands in New Moon Beach and is overjoyed to open her own bookstore – Literally Magic. Things seem to be looking up for the young woman until unexplainable magical abilities start uncontrollably bubbling out of her.

Plagued with fear over what is happening to her, it appears that fate has dropped Ola Mae into a cauldron filled with many more unexpected surprises. Not the least of which is that she’s not really an orphan, but part of a powerful family of witches living in her adopted city. How could she not have recognized that she’s a witch too?

Opening their arms to their sister, the witches of New Moon Beach must help Ola Mae hone her witchy powers and fast. A dark evil has descended on the beach city that threatens to engulf Ola Mae and her newly found family in a maze of murder, magic, and mayhem. And what of the handsome witch and the love he tempts her with? Will she allow this darkness to destroy her chances for a happy ending?

Ola Mae must learn quickly how to use her emerging magical skills if she’s ever going to be able to navigate this maze of death and destruction to save New Moon Beach and the man she’s come to love.

“After spending over thirty-five years in education I discovered my love for writing and decided that it was time to retire and create my own magical beach city. Modeled after Redondo Beach, California, where I grew up - I’ve had a super time introducing readers to the Merriman community. A family of witches filled with love, magic and adventure, these three sisters and their extended family members are constantly running into one paranormal problem after another.”

Murder by Magic has a combination that, at least in my experience, is unique. As a general rule, I’d say unique is good. It’s a cozy mystery, but the amateur sleuth involved is a witch. While a cozy will typically involve characters from a tightknit, small community, having this community not only be a small town, but more specifically those residents of the town with magical powers, is a change of pace. Our intrepid detective, Ola Mae Masters, is a witch who just recently found out she is a witch and is still discovering and learning how to use her powers. This only adds to the story, both with some interesting twists to the storyline and some additional tension, both for her and for us as the reader. There might be a budding romance too.

If you enjoy cozy mysteries and paranormal romances that push the boundary of the genre, Murder by Magic would be a good choice. If you like both, it should be a no-brainer.

While part of a series I haven’t read others in the series and didn’t feel I was
missing needed back story despite not having read any of the prior installments.