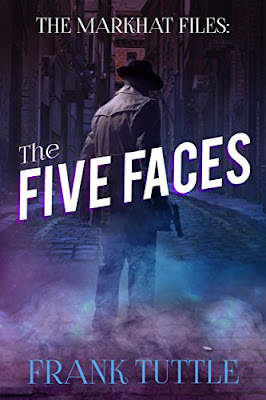 “It starts as a typical day in the park, with Markhat tracking a bully the law won’t touch, and promising a little girl he’ll find her missing dog, name of Cornbread.

But as the sun sets over Rannit, a new menace creeps out with the dark. There’s a killer on the loose, and Markhat the finder suspects magic behind the murders. Each victim receives a grisly drawing depicting the place, time, and manner of death. Not a single victim has escaped the brutal fate drawn for them—and now Markhat’s own death-drawing has arrived.”

To learn more about Frank Tuttle you can check out his website. However, I suggest following his blog, it is always entertaining.  Of course you may also stalk him on Facebook.

I have been reading Frank Tuttle’s Markhat books since I got my very first Kindle. He quickly became one of my favorite Indie authors. I love the fantasy world and the quirky characters he has invented for this series. So, I was excited when he submitted The Five Faces to Books and Pals for a review and I jumped on it. Needless to say it didn’t take me long to settle back into Markhat’s magical world, there is a noir feel to the mysteries and Mr. Tuttle has recently employed steampunk in the mix. I love the way Indie authors can play around with genres.

Markhat is a finder, a private investigator, who has a capricious relationship with the local law enforcement of Rannit. The story begins with Markhat looking for a young girl’s stolen dog and quickly escalates into a mystery much more complicated and far reaching than dog theft. The plot moves at a nice pace as it twists into the devastating potential of unraveling the whole universe as human soul theft becomes the theme. With the help of Mama Hog, Granny Knot, Buttercup, Stitches, and Evis, Markhat has to fit the pieces together to save himself and the world as they know it from an evil spirit seeking his own godhood.

Mr. Tuttle has a talent for developing his characters with dialog that I really appreciate. I love the banter and self-deprecating humor that he excels at. I also like the elements from our world that he weaves into his unique fantasy world of human characters along with wand-wavers, undead, trolls, banshees, soothsayers, and vampires.  I am not quite sure what to make of the slilth, but I like what he did with it at the end of the story. I am laughing right along with Stitches. I also have to laugh at the Brown River Bridge clown patrol, they add an interesting touch to Rannit’s unsavory population.

If you enjoy noir detective stories with a human element in a paranormal atmosphere you are bound to enjoy The Five Faces or any of Frank Tuttle’s Markhat series for that matter.

The Five Faces is book 6 in the Markhat series. I think this book could be read as a standalone, however some character nuances would be missed. I don’t think that would lessen your enjoyment of the story.

I found no significant errors in editing or formatting.