Through Tick & Tinn: The True Story Of The Greatest Unknown Comedy Team Ever Known by Josh Hickman 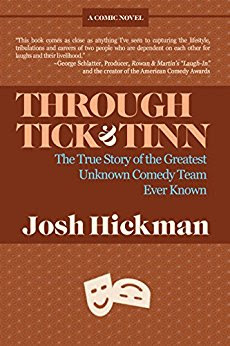 Say “Martin & Lewis,” they’ll say, “A phenomenon!” Say “Rowan & Martin,” they’ll say, “Laugh-In!” Say “Tick & Tinn,” they’ll say, “You mean the tailors?” Finally, Josh Hickman bravely attempts to right a tragic comedic travesty which has persisted in the annals of entertainment for decades longer than it should have. Unmercifully digging through personal interviews, yellowed press clippings, grainy videotapes, scratchy kinescopes, scratchier comedy albums, and reams of questionable anecdotes, Mr. Hickman has managed to do the unthinkable—to piece together the most coherent portrait possible of the life of one of the last great comedy teams of the era.

Born in Virginia and raised in Texas, Josh Hickman is now a writer, filmmaker, musician, and artist based in Los Angeles.

This satirizes celebrity biographies. And does so well. Everything is true, or at least seems like it maybe could be, even when it seems a touch far-fetched. It doesn’t seem any more “out there” than things that are in other celebrity biographies you’ve read or heard about which are said to be true.

One nice touch was the integration of references to things that were happening in real life (if pop culture is real life) through the period covered by the book. There were even a few references to places and things in different cities that, while not something most people would know or care if they were accurate, they were. As far as I could tell everything was true to life except for the part that, by design, wasn’t. (Or maybe Tick and Tinn are real and all of this is the truth.) Kids (those of you under 50 or 60) won’t understand all the references but should still be amused by the humor.

If you’ve read a celebrity bio or two in your life. If you like satire and have been told your sense of humor is a little bit warped. If you like to laugh. This book might be for you. If you’re no longer a kid, that’s even more likely.

My review is based on an uncorrected advance reader copy. I can’t judge the final product in this area.