Review: A Better Place To Be by David Wind 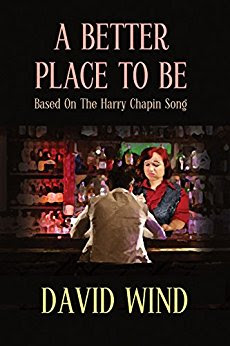 “A story about life, though perhaps not the one you would choose to live.
Inspired by the characters from the Harry Chapin song of the same name, A Better Place To Be is a story of love, loss, and the ability to overcome the worst that life can throw at someone and come out the other side.”

The author of numerous novels in genres ranging from fantasy to mystery and noir, David Wind lives with his wife and pup in Florida.

As the description and cover make clear, this book is based on the Harry Chapin song of the same name. Yeah, you know, Harry Chapin. The guy who wrote Taxi (no, not the TV thing with Danny DeVito, the song). Don’t know that song? How about Cat’s in the Cradle? I guess mentioning 30,000 Pounds of Bananas or W.O.L.D would be pointless. Potential readers of this book are going to fall into two camps. The kids (okay, middle-aged adults) who have no clue who Harry Chapin is and are clueless about the songs he wrote and sung, and those like me, who can still remember the sick feeling he got 36+ years ago when my brother-in-law told me Harry had died that day in a car crash.

For you kids, Harry Chapin’s pop-folk songs were story songs. His first big hit, Taxi, packed more oomph than an average novel in a touch shy of seven minutes and, despite being twice as long as a typical radio-ready song of the day, it managed to become a hit.

The author received permission to include the lyrics to A Better Place to Be in his book. He does this by using snippets at various points in the story along with including complete lyrics at the end.

For those not familiar with the song, I think you’ll like the book if this is the kind of story you’d normally go for. It’s a good story of a life that goes off the rails and of eventually getting things back on track. After reading it, find the song and give it a listen. I’d guess the odds are good it will remind you of the book.

For those already familiar with the song, all of the above might still apply. Or it might not. I suspect it depends on how you feel about this particular song. Most stories require the reader to fill in the gaps to some degree. A song that tells a story or even one without a story, but that makes some kind of point, requires the listener to fill in even more gaps. I found myself struggling with how the author filled in some of the gaps here, because that’s not what I imagined was going on in those blank spaces. The author’s interpretation wasn’t wrong, just different. If this is one of your favorite songs of all time, my advice would be that you might want to stay away. I’m glad I read this, not only because it is a good story, but also because it got me thinking about these things. Now if someone were to write a book based around some of Chapin’s other songs (Taxi springs to mind) I might steer clear. I guess I’d summarize my thoughts by saying that even though I’d probably be perceived as smackdab in middle of the target audience for this book, that my feelings about it are mixed.

Big Al, Much thanks for taking the time to review 'A Better Place to Be'. I appreciate the thoughtfulness with which you wrote the appraisal, especially as someone who likes(d) Chapin and his music. He was a special storyteller, and—like you—the people who listened to him all had their own way of filling in those spaces.

Hi there!
I'm a HUGE fan of this book :)
Harry Chapin is before my time, and obviously the reading between the lines of the song thing is open to interpretation but what was done with this book worked for me!

Thanks for the comments, David and Lacey Ann. I agree, at its heart this is a good story. Ultimately that's what matters the most.