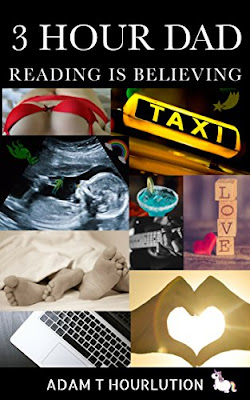 “What would you do if you were suddenly told you were going to be a mum or dad without any notice? How would you react? What thoughts would go through your head? You haven't prepared to be a parent, you've not made any arrangements and nobody in your family is aware.

Now imagine that not even the mum-to-be knew that she had been hiding a little person inside her tummy the entire time.

One day Adam, just your average, typical guy receives a call from his mother-in-law (to be !) summoning him to the hospital following his girlfriend being rushed in with suspected appendicitis only to discover that she is in fact having contractions and has been admitted to the labour ward.

This heart-warming and true story invites readers to step into Adam's shoes and experience what it is like to be a 3 Hour Dad.”

I suspect Adam Hourlution might be a pen name, but I’m not sure. It’s apparent he comes from the UK, but other than that, your guess is as good as mine. He does invite readers to friend him on Facebook, but as you can see if you check out his Facebook wall, there isn’t much there either. What I can say is he lives with his relatively new wife and their child.

I’d call this an adventure story. Anyone who has become a parent knows the extremes in emotion you go through, from joy to panic, and that’s assuming you both intended for this to happen and had time to prepare. But imagine you’re a couple who wasn’t planning on having a child right now and thought you were doing everything to prevent it. Imagine that the woman doesn’t realize she’s pregnant. Obviously, she can’t tell her boyfriend. But once she goes into labor, someone is going to figure out what’s going on and the couple has to make the switch to parenthood with no time to prepare.

There you have the premise of this memoir. It made me panic just imaging how I’d have reacted in the same situation. The author did much better and the story of how he reacted and how he views the situation now that it is a few years behind him is both humorous and inspiring. A fun read, as long as you don’t have to go through the experience yourself.

As the author is from the UK, the language and spelling conventions used reflect that.

I go up to people out of the blue and surprise them with gifts, or vouchers or pay for their food at the drive thru's. It took me 3 years to write the book and my website is bubbling away in the background. It will include videos and testimonials of my random act of kindness stunts etc.

Again I am super grateful for your feedback and hope that you enjoyed reading about me crumbling !!!! I have not ever known shock like it!