Review: Every Wind of Change (Paths of Shadow Book 3) by Frank Tuttle 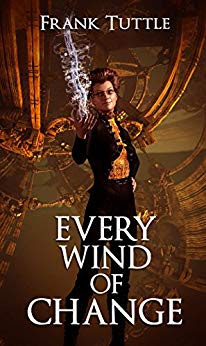 “Mage Meralda’s perilous airship journey across the vast Great Sea made her a hero.

Her discovery of the Arc may doom her world.

The Arc, a mysterious metal structure hanging ten thousand feet above the stormy Sea, is singing. Tasked by the King to decipher the Arc’s strange song, Meralda discovers plans for an outlandish machine hidden in the song’s mathematical lyrics.

With sharp-tongued vegetable familiar Mug at her side, Meralda embarks on an unexpected journey across the void. Together they face ravenous beasts, ancient engines, and the most diabolical creature of all – Meralda's own long-lost mother.

With nothing but her wits, her Sight, and her determination to return home and find a decent cup of coffee, Meralda vows to lead her tiny band to safety. But her long journey home also means facing an old sorrow, and a singularly unpleasant truth.

As monsters close in, can Meralda prevail where thousands before her failed and perished?”

To learn more about Frank Tuttle you can check out his website and of course you may also friend Mr. Tuttle on Facebook.

While this series, Paths of Shadow, has always had an element of steampunk and magic in its world, Every Wind of Change jumps into the realm of Sci-Fi after the “event.” Sorry, I got a little ahead of myself there. Meralda has been assigned, by the King of Tirlin, to decipher the sounds the mysterious Arc is emitting. He also bestows a pay raise and a promotion to Tirlin’s Secret Service. Her new boss is none other than Mrs. Primsbite. To put a cherry on top of it all, Meralda’s long-absent mother reappears and insists on insinuating herself, and her little dog too, into her daughter’s life again. Donchen attempts to arbitrate between mother and daughter, to Meralda’s dismay.

While Meralda is attempting to decipher the Arcs complicated song, King Yvin insists on seeing her results so far. Meralda has to oblige with an incomplete work. Unbeknownst to all, this exhibition initiates a standard tripping wheel transport protocol from the Arc bringing forth the “event” that hurls Meralda, Donchen, Mug, Meralda’s mother, and Mrs. Primsbite (Oh, and I mustn’t forget Nameless and Faceless in crow form as well.) into the embattled Hub of the Arc which is located in the void. Luckily our small band is befriended by an unusual robot named Skoof, who knows the Arc well and assists finding them a safe place to hide from giant carnivorous cockroaches, called Mags who are well aware of their arrival, before they can formulate a way home without magic.

The plot is cleverly crafted and engaging with twists and turns of the outlandish storyline, since they are all out of their element I found that fitting. The dialogues are intelligent, cunning, and witty. New characters are introduced who I hope to see more of in the next book. The scenery and surroundings are well described, which place the reader right beside the characters. The ending is epic and a lot more far-reaching than I was expecting. Meralda’s mother also gains a new larger pet, which fits her well. Readers will also be pleased that Mr. Reardon, mother’s ankle-biter, is still with her as well. Don’t miss this new addition to Meralda and Mug’s adventure.

Every Wind of Change is the third book in a planned four book series from Mr. Tuttle’s, Paths of Shadow. Each book stands alone. However I have enjoyed watching each character’s growth as the series continues. The first book of the series is All the Paths of Shadow, followed by All the Turns of Light.

I did find a small number of proofing issues, nothing that threw me out of the story.