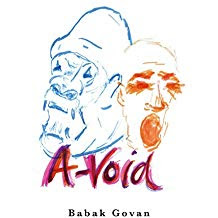 “Those who adapt to environmental changes survive. What happens when the environment changes too fast for us to adapt?
In an increasingly fast-paced, near-future world, psychologist Billy Carrington wakes from a nap to discover that he is completely alone. With his all-in-one Organelle smart device, a growing menagerie of animals, and a potentially life-saving vaccine, he crosses the country searching for his wife and child—and for an answer to what happened while he slept. A cautionary tale of our fast-forward world, A-Void illuminates the risks of accelerating technology and information overload.”

A psychologist in private practice, Babak Govan is “the originator of the theory of the evolving psyche and moderative psychotherapy.” He lives in Portland, Oregon with his family. Although A-Void is his first published book, his work has been published by various literary periodicals. He’s also recorded an album of electronic rock under the name Secret Arcade.

While A-Void has a lot of the characteristics you’d expect from a dystopian story, with things changing in a way that leaves the characters off balance and scrambling to figure things out, it felt different. Unlike many dystopian books, I didn’t get the feeling that I’d been here before and could anticipate what was coming next. Along with Billy, the narrator and only real character in the story, I was nervous and concerned as to what he’d find next. If you’re a fan of the dystopian genre, this novella is one you’ll want to give a try.