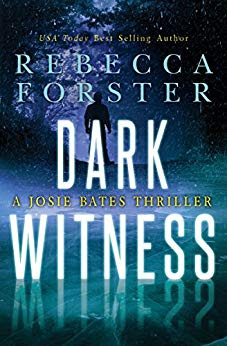 “As the edge of winter slices through Washington D.C., Josie Bates testifies before Congress about the Albanian blood feud that sent Hannah Sheraton and Billy Zuni fleeing for their lives while Archer reluctantly abandons a trail that has gone cold in his search for the teenagers. Determined to stay one step ahead of the authorities who want Billy back and a blood feud that will only be satisfied when he is dead, Hannah and Billy head north. There they will hunker down in the darkest corner of earth they can find and wait for the danger to pass. Though the journey is treacherous, they finally find themselves isolated, safe, and as far from Hermosa Beach as they can get. But their relief is short lived. When the perpetual winter dark turns to inky black, they realize they have taken refuge in hell. Now the fight in front of Hannah and Billy is not only for their lives, but their very souls.”

Those who have read the previous books in the Witness Series knew when they finished Forgotten Witness (book 6 in the series) that there would have to be at least one more book. Forster had left two important characters, Hannah Sheridan (a character almost as important to the series as Josie Bates), and recurring character Billy Zuni in limbo, with what little changed through the course of book six making their situation more tenuous. (For those who haven’t read the prior books or may have forgotten, they were running from a man intent on killing Billy.) This installment picks up Hannah and Billy’s story where their situation gets even worse.

I’m reluctant to say anything specific about what happens because everything feels like it would be a spoiler. While the last book focused on Josie Bates, this is Hannah and Billy’s book with Josie and Archer taking secondary roles. Although the initial book in the series was clearly a legal thriller, as the series has progressed it has slid out of the legal subgenre and into the broader thriller or suspense category. If this book has a single scene in a courtroom, it is so minor that I’ve forgotten it. If you’ve read the series thus far, you’ll definitely want to pick up this one as Hannah and Billy flee from one dangerous situation, only to fall into another. What that is and how it resolves is quite a ride.

This is the seventh of a series. Although I believe it could be read as a stand-alone and the story still make sense, to get the full impact an understanding of what has come previously for these characters would be much better.

The version I read was an advance reader copy. I’m unable to judge the final product in this area.