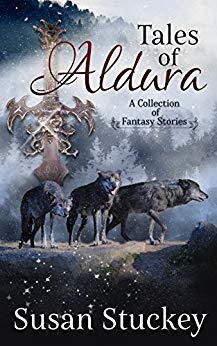 Be they old or young, willing or reluctant, or merely following their destiny, heroes capture imaginations and provide an escape from everyday life.

In these stories set in the magical world of Aldura, the heroes stand as defenders of good, be they struggling against their own insecurities, fears, or the unbeatable forces of the enemy, each must find the will to persevere, and the courage and strength to triumph.

These tales transverse the gamut of emotions and reveal the quiet depth and resolution of those who are willing to sacrifice to help others.

I have read and reviewed several of Ms. Stuckey’s stories here at BigAl’s Books and Pals. I like that Ms. Stuckey has put these stories in a timeline order omnibus to read. All of these novellas and short stories have an overall theme of honor, commitment, family, and all have difficult choices to be made. She is a masterful storyteller.

Listed first are a few lines from the stories I have reviewed before. To see the full review please enter the title in the search box at BigAl’s Books and Pals.

Tears of a Seeress: A prequel to Phaedra. It’s a powerfully emotional tale about love and commitment for family, clan, and hope for a better future… The magic is well thought-out and fascinating.

Phaedra: She has known her fate since the time she was born, she thought becoming a ranger would help prepare her for her task. This is an emotional story of honor, fortitude, strength, and destiny. I found it heart-wrenchingly well told.

Choices: Ranger Thaenad hears a call for help in the ether. A small group of refugees, mostly younglings, are held up in a small broken down hovel being hunted by a group of Halurdow and they are closing in on their location. The plot moves quickly as our small band flees for the safety of Stryker Pass. Thaenad and the black wolves prove to be a heroes, in every sense of the word.

Kaserie’s Choice: As Kaserie, a slave for the past eight years, escapes the barbarian Halurdow who enslaved her waiting for her potential magical powers to manifest. She heads to the Temple of Azrael, upon arrival her powers begin to manifest. With the help of the black wolves and a Liheiren Ranger named Thaenad, she learns she has some seemingly impossible choices to make and tasks to complete to change the future for the Kalieri people.

Jezrei's Justice: This short story is a glowing testament for love and faith on many levels. Jezrei is an elderly Lieheiren Muhadun, a teaching priest with healing powers, of the Kalieri. Jezrei has been tasked with the protection of a group of children in the Temple while the barbarian Halurdow storms the town killing and burning everything along their way. To keep the children calm he begins telling the children about the Twin Gods who created their world. I loved the ending of this story. Out of the mouths of babes was never so powerful.

The Sword of Isyndral: After the murder of her parents, the King and Queen of Dragons Keep, Allena must learn the secret to unleash the Twin Gods magic from the Sword of Isyndral in the midst of an epic battle surrounding the Dragons Keep. All the clans of Aldura are at risk of annihilation by the Halurdrow if Dragons Keep falls. There is intrigue, magic, broken oaths, treason, and dragons.

New stories I have not reviewed before:

Is the war ballad of how Galdona’s capital city of Azraelis fell to the Halurdow. The battle beasts of the Dark God, Urdow.

A sweet little story told mostly through Jaelyn’s eyes. A young healer, from the city, who has been sent to work in the remote Fernwood Valley. It’s a lonely existence when the town is skeptical of their newcomer. She has been asked to assist with the birth of the Klussner’s tenth baby. As she passed Fernwood Creek on her way to their cottage deep in Fernwood’s wilderness she found three circular stones with holes in the middle, known as friendship stones in the city. She stashed them in her pocket missing her friends back home.

At the baby’s birth Jaelyn is envious of the camaraderie of the family’s friends who have gathered to help. On her way back to her own cottage darkness is falling faster than expected. Having heard trolls had been spotted by the creek every sound she hears starts to unnerve her. So she takes off running and trips over an exposed root. What she sees next causes her to faint dead away.

This is a story of the blessing of acceptance, trust, and friendship from those
you never knew existed.

A warring fleet of ships have conquered the Isle of Ipsen Watch. They need to find the Guardian of Ipsen to break the shield protecting Ipsen. On a small island just outside the shield they find an old crone when what lured them to the isle was the sight of a young woman in a green dress. Their mages can learn nothing from the crone, her memory only goes back to the day the conquerors arrived. They decide to keep her alive hoping to gain her trust so that one day she will break and tell them her name and where the Guardian of Ipsen is hiding. The tale is told through the eyes of her female caretaker. Alliandre is well written and captivating.

The Bonding - Tale of Aethnad and Stormwing:

I viewed this poem as a ballad. Stormwing is a dragon watching a drowning man and decides to save him. Death and Fate intervene. This is a story which will be told and re-told on Aldura.

It is amazing how much story Ms. Stuckey can pack in so few words. I always enjoy the way she tells a story. I highly recommend you pick up this omnibus today.

All the stories included in this publication are also available as stand-alone publications.

Thank you so much for choosing to read/review my book. Lovely review. Made me do happy chair dances. :-)

Ms. Stuckey, you are welcome. I love the world of Aldura. Thanks for dropping in and commenting.