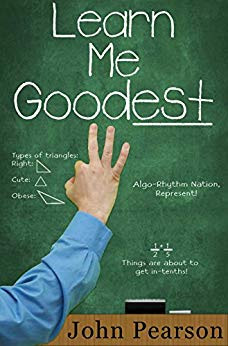 Note: This is the first of a Doubleshot Review. Be sure to come back Monday to get BigAl's take on this same book.

“Jack Woodson, the engineer-turned-teacher (and future Dancing with the Stars champion), is back for another school years’ worth of emails with his pal and former colleague, Fred Bommerson. Join Jack as he navigates the tricky maze of overly-distracted students, administrators with bullhorns, and a wife dealing with her own classroom situations.

Can he convince the class hypochondriac that the school is not crawling with Ebola? Will he live up to the expectations of the crotchety old man inhabiting the body of one of his students? Are there any special benefits to be received from the self-proclaimed ‘Mayor of Pizza Town’ in his homeroom? With subject lines including, ‘Here Comes Money Boo Boo,’ ‘Snakes on an Inclined Plane,’ and ‘The Seven Habits of Highly Infectious People,’ Learn Me Goodest will have you laughing with each new chapter.”

“John Pearson was born just outside of Washington, DC, but moved to Texas as quickly as he could. Growing up with a passion for science, math, and calculator watches, he obtained engineering degrees and basketball (watching) accolades from Duke University and Texas A&M. His first job out of college was designing small solid-state heat pumps, where his cubicle simply was not big enough to contain him. When the engineering market went sour, he decided to try his hand as a teacher…”

Learn Me Goodest follows the email--chapter format, the same as the first two books of this trilogy. The subject line hints at the subject of that chapter. Mr. Pearson is a master wordsmith and uses this talent to interject humor and word play into his stories and signing off each chapter. His students, this year are fourth graders, whom are mostly loveable if not a bit trying at times.

One of the most demanding areas this school year are the three standardized tests – math, reading, and writing-- his class has to tackle as part of the STAAR test system. Whenever the class is prepping for a portion of one of these exams he would poke fun at the second A of the acronym STAAR. Such as, the extra A is for Apocalypse, Awesomesauce, or Asparagus. As in every class there is a variety of levels of students. I found it evident that one of things the teacher enjoyed doing was breaking his class up into groups and walking around listening in on the students discussions about whatever the subject was they were challenged with.

Learn Me Goodest is a light enjoyable read for anyone who enjoys stories about kids.