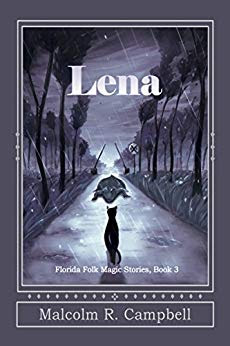 “When Police Chief Alton Gravely and Officer Carothers escalate the feud between ‘Torreya’s finest’ and conjure woman Eulalie Jenkins by running her off the road into a north Florida swamp, the borrowed pickup truck is salvaged but Eulalie is missing and presumed dead. Her cat Lena survives. Lena could provide an accurate account of the crime, but the county sheriff is unlikely to interview a pet.

Lena doesn’t think Eulalie is dead, but the conjure woman’s family and friends don’t believe her. Eulalie’s daughter Adelaide wants to stir things up, and the church deacon wants everyone to stay out of sight. There’s talk of an eyewitness, but either Adelaide made that up to worry the police, or the witness is too scared to come forward.

When the feared Black Robes of the Klan attack the first responder who believes the wreck might have been staged, Lena is the only one who can help him try to fight them off. After that, all hope seems lost, because if Eulalie is alive and finds her way back to Torreya, there are plenty of people waiting to kill her and make sure she stays dead.”

I have been looking forward to this book. At the end of Eulalie and Washerwoman Eulalie was leaving to fetch Willie back home. They’ve had a long-standing relationship and Eulalie was ready to take it to the next level. Being a romantic at heart I was ready for this relationship to move forward. So, what does Mr. Campbell do? He puts Eulalie in peril! Which in turn kept me reading late into the night.

Thank goodness Lena survived the wreck into the swamp, but Eulalie is missing and feared dead. Fortunately Eulalie’s daughter Adelaide has some of her mama’s conjure ability. However, she is a little too head-strong and undisciplined. Pollyanna, is a new character with a lot of spit-fire and potential. I really liked her and can’t wait to see more of her. And I really want to know who her father is.

The plot twists really shouldn’t surprise me. The town of Torreya is full of high-positioned men who secretly belong to the KKK. They are cruel, evil, and easy to hate. Towards the end of the book Joe Moore, the local raccoon, scared the bejeezus out of me with his prophesy to Lena about the coming day. After my heart started beating again, and the tense cluster... uhhh... a mess of a climax. I was completely satisfied and it left me with a smile on my face.

My favorite sentence in this story:

“Like a conjure woman, the good Lord does his work with the materials at hand,”

Lena is the third book in Mr. Campbell’s Florida Folk Magic Stories. Following Conjure Woman’s Cat, and Eulalie and Washerwoman. Please be aware the language is not always politically correct, however it is true to the era.

I had forgotten this was imminent. Glad to see it's out. Will fettle a copy soonest. I was afraid that this was to be the last instalment in the tale of Eulalie and Lena and their friends, lovers and enemies. The review seems to imply that this is not the case. Hooray!

Eulalie lost in the swamp! Lush.

Judi I thought this was going to be a trilogy as well. However, I'm begging for more. We'll see what happens. I have my fingers crossed for more.